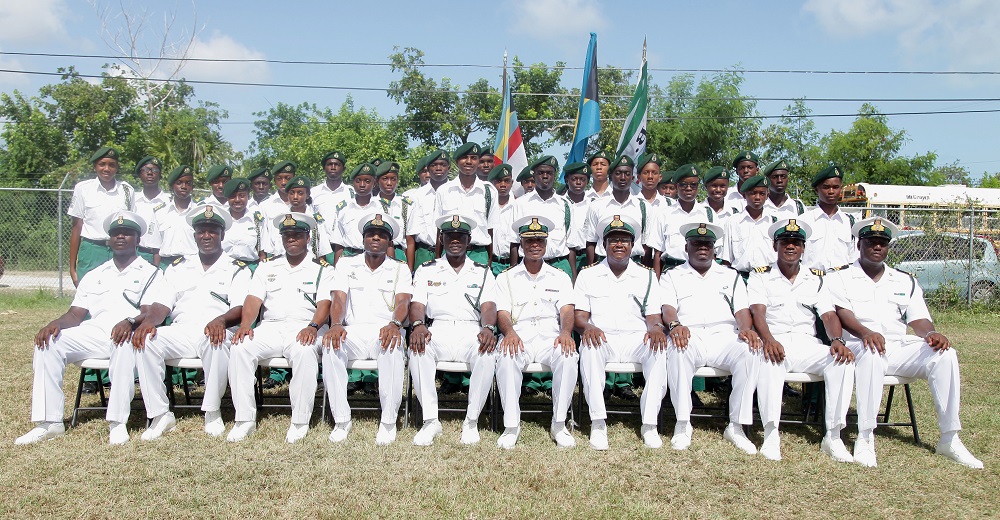 Bahamas, August 7, 2017 – Nassau – A total of 82 Ranger Trainees graduated from the Royal Bahamas Defence Force Rangers Leadership Training School on Friday past.    This was the culmination of a 3-week long program where the trainees between the ages of 12-20 years were pulled away from their usual daily comforts and immersed in an accelerated leadership program.

Also included in the Rangers’ Leadership camp was a job preparedness workshop for the Antiquities, Monuments and Museums Corporation (AMMC) historic regiment cadet.   This was aimed to prepare the Ranger graduates for the workplace as well as serving as tour guides in the AMMC’s Historical Regiment Cadet Core program. 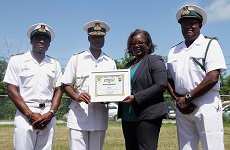 Commodore Tellis Bethel, Commander Defence Force, hailed the program as one designed to prepare Rangers for employment in the Defence Force or the commercial maritime sector.   The program also encourages Rangers to pursue their vocational interests or academic studies beyond high school.   He stated that youth have an important part to play in national development and that the Defence Force’s Rangers program is preparing them for such a role.

The Commander Defence Force thanked the Director of the Rangers program, Lieutenant Delvonne Duncombe, Ranger Instructors, the Defence Force Officers and Marines, as well as representatives from the Rangers Parents In Action Group for the outstanding work they did in making the program a success.   He also expressed the Defence Force’s appreciation for the support of corporate sponsors which included BTC and Bahamas Waste Ltd.    Additionally, he thanked the principal and staff at Program SURE for making their facilities available. 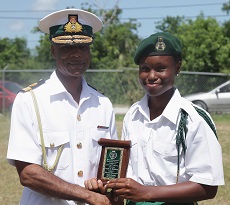 Rangers who received outstanding awards during the program included:

Header photo shows: Royal Bahamas Defence Force Ranger Trainees that graduated from the RBDF Rangers Leadership Training School on August 4, 2017. The three-week course was held at the SURE facility, Gladstone Road. Seated in from are Commodore Tellis Bethel along with RBDF Officers and Warrant Officers and Senior Rates.

Rangers Photo two shows: The Rangers Special Drill team performing a routine at the graduation ceremony for 82 Rangers trainees on August 4, 2017. The three-week course was held at the SURE facility, Gladstone Road.

Rangers Photo three shows: The Rangers band performing a musical selection during the graduation ceremony for 82 Rangers trainees on August 4, 2017. The three-week course was held at the SURE facility, Gladstone Road.

Rangers Photo four shows:  BTC’s Chief Marketing Officer Janet Brown receiving a presentation from Commodore Tellis Bethel as a token for being a corporate sponsor for the Rangers Leadership Training camp. At left: is Director of the Rangers program, Lieutenant Delvonne Duncombe, and on the right is Captain Clyde Sawyer, Captain Coral Harbour.

Rangers Photo five shows: Ranger Xaria Laing receiving the Best Female Recruit Award during the graduation ceremony for 82 Rangers trainees on August 4, 2017. The three-week course was held at the SURE facility, Gladstone Road.