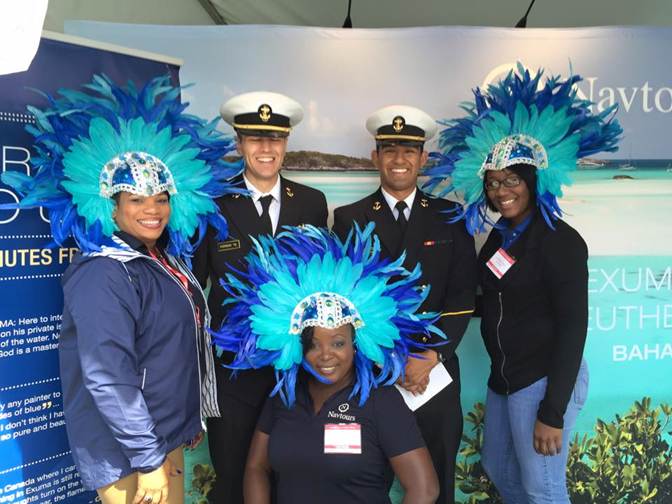 “It was an amazing experience,” said Clara Alcime, one of the sales and marketing team at the $200 million oceanfront development on New Providence’s southeastern coast. “When we traded sailor caps for Junkanoo headpieces, the attention for The Bahamas was phenomenal. And what was really special was how many people who came up to our booth and said they had sailed through or in The Bahamas and it was the best time in the water of their entire boating lives. There were lots of positive comments from the boating community.”
And, according to NAVTOURS Bahamas Base Manager Donella Bethel, some who had not experienced The Bahamas were planning to.

“More than one person told me sailing in The Bahamas was number one on their bucket list,” she said. “We were more than 1,000 miles away but everyone seemed to know the Exumas as the world’s best boating waters.” The show, which features everything from canoes to megayachts, is especially popular with sailors and again this year attracted nearly 50,000 just to the sailboat show.

“It was an ideal market for NAVTOURS which moved their fleet of 20 vessels to Palm Cay Marina in September, making for an ideal launch for a clear sail to the Exumas,” said Palm Cay Marina Dockmaster Demaro Demeritte. “Guests fly in, spend their first day here enjoying the pool, beach, restaurant and clubhouse and they take off for Exuma without worrying about boat traffic or other navigational hurdles they might face in the harbour. It’s a head start on their vacation and a win-win for everyone.”

In September, Palm Cay learned that it had once again earned the highest praise from boaters of any New Providence marina and was awarded the top ranking on ActiveCaptain.com, a site that is to boaters what TripAdvisor is to the travel industry. The 194-slip marina is one of the key features of the nearly 70-acre amenities-rich residential development that will eventually have about 300 home sites. Only about a dozen of its completed townhomes are available and its current condo project at The Anchorage is well underway with just a few condos remaining for sale.

The 2015 Annapolis Sailboat Show drew about 50,000 spectators while powerboats and other vessels of all sizes drew additional crowds.