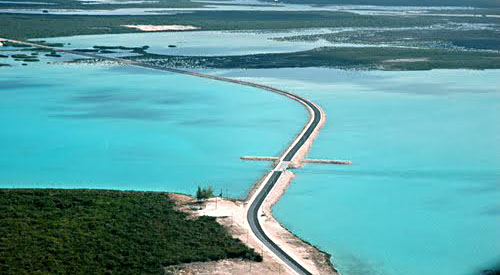 Providenciales, 12 Aug 2015 – Traffic changes are announced for the North to Middle Caicos Causeway as phase two construction continues on the one mile linkage which was battered in 2008’s Hurricane Hanna.

It will mean that drivers now have to take an alternate roadway created as JACA TCI Ltd completes the work of installing culverts on the main roadway.

It was explained that lights are installed but the temporary passage requires great caution, especially during the night. Public Works explains about the culverts that: “The construction of box culverts is important to the refurbishment of the causeway as they will increase the water flow area through the causeway, an improvement both from the engineering and environmental aspects.”

It was added that the construction, which started since June 1, has a completion date of early December 2015. “The outcome will be a noticeable improvement, as the reconstruction will include a bituminous paved surface in order to limit damage from future hurricanes, mangrove plants which reduce the effect of a tidal surge and damage on shore.”