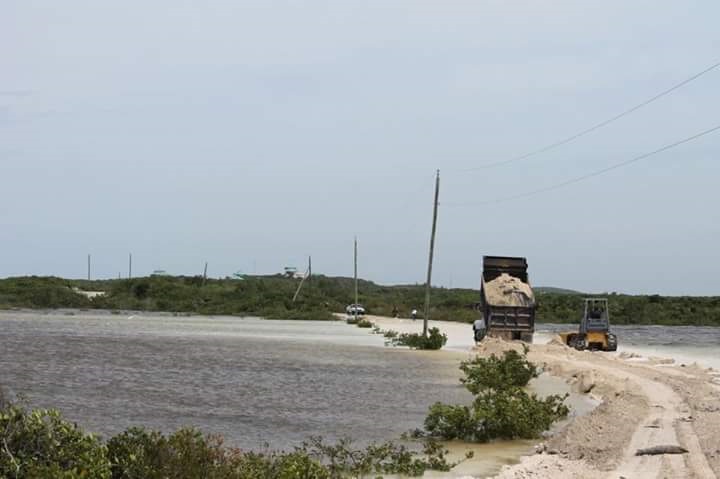 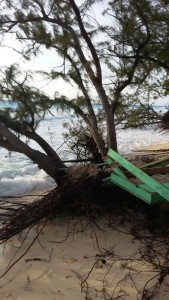 Providenciales, 07 Oct 2015 – A Lew 1 Shipping tug boat was lost, a barge owned by Clay Arthur is ruined and vehicles in the parking lot of Belfield Landing in Kew, North Caicos were destroyed and that is just some of the damages on the country’s bread basket island after the recent storm.

Reports continue to come in on the losses from Hurricane Joaquin, which last week, for three days battered the islands in its outer bands as it moved up the TCI and Bahamas archipelago.

It is said, some owners of those parked vehicles at Belfield are not yet even aware of the loss.

The Premier, following a Saturday damage assessment tour of affected islands did say the Government farm was hard hit and Magnetic Media has learned that specifically means trees are uprooted with a substantial loss in fruit trees at the site.

FortisTCI has also been summoned to North Caicos to sort out a twist of trees and power lines near the Government farm. Flooding this time around in the North was minimal, water has subsided and only debris is left for clean-up.

The causeway is under phase two construction right now following battering in the 2008 hurricane season, and the temporary roadway created as a bypass between North and Middle Caicos while work continues, has been underwater since the storm; reports are it was impassable.

There was also a truck lost in the hurricane; the Public Works Department vehicle was washed away by a giant wave, we are told.

The Disaster Management Department will speak to Magnetic Media later today as it continues damage assessment and confronts public criticism that there was insufficient information coming and that caused residents to be unprepared for the ferociousness of Hurricane Joaquin.