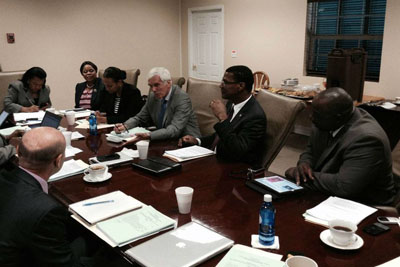 Providenciales, 09 Jun 2015 – Despite some legal woes in the Desarrollos camp; government is moving ahead on the planned development for Grace Bay, Providenciales proposed by the hotel developers and giving them more land for the project. The last Cabinet meeting revealed that the Governor was advised to approve a 99 year lease over 0.46 acres of extra land lying seaward of Desarrollos current parcels; they reportedly want the land for a beach front jetty located adjacent to their development.

A $224 million dollar agreement was signed in April for the Ritz-Carlton branded resort to feature casino, spa and 124 luxury rooms including penthouses and resort residences. Construction on the Ritz-Carlton is scheduled to begin this November. Also at cabinet last week, the Ministry of Finance is trying to take over the office spaces at the old TCI Bank. It is proposed for Customs, the Revenue Control Unit and the Treasury to be housed in the spot if the lease deal is sealed.