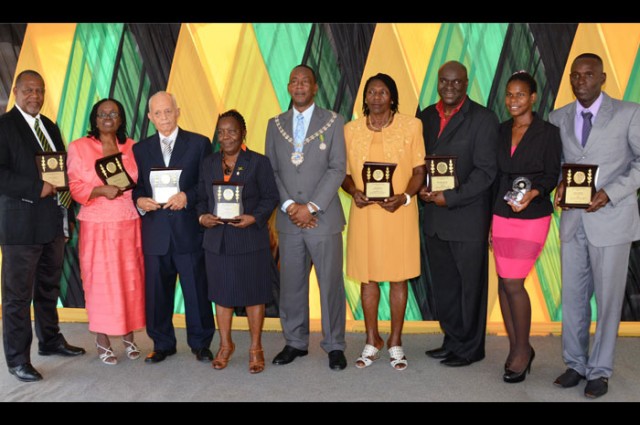 MONTEGO BAY, Oct. 20 (JIS): Seven persons in St. James, who have served in the fields of education, tourism, community service, sport, industry and commerce for more than 230 years combined, were recognised with the Sam Sharpe Awards, at the National Heroes Day Civic and Awards Ceremony, held in Montego Bay, today (October 20).

The Sam Sharpe Awards – named in honour of the National Hero – are conferred annually on persons who have made significant contributions to the betterment of their communities in their respective fields of endeavour, without accolades.

The awardees are Evatt Bloomfield in the field of Tourism; Cecil Cornwall and Eileen McIntosh in Education; Myra Thomas and Elmenia Reid, for Community Service; Basil Johnson for Industry and Commerce; and Linden Thomson in Sport.

A special award for bravery was presented to 24 year-old mother, Makada Hylton of Marliland, St. James, who on June 2, 2014, saved her mother and sister from drowning in flood waters that swept away the vehicle in which the three were travelling.

Mayor of Montego Bay, Councillor Glendon Harris, in his remarks, called on Jamaicans to be more participatory in celebrating the work of those who have paved the way for present day Jamaica.

He lamented the disconnect between the achievements of past and present generations. “These days we find that the history of our nation has become more distorted as each generation is bombarded with new information from other places, not necessarily related to our journey as a people,” the Mayor said.

Jamaica, he continued, must seize the opportunity to pass on to the next generation that which is integral to the strengthening of the country’s sovereignty and seek to teach the youth that what we inherited was fought for, and was not accomplished easily.

“We should add to this story of hardships and victory, the idea that each Jamaican, being the recipient of a free nation, has a responsibility to be as productive as he/she can be, to build Jamaica, and to ensure its prosperity,” Mr. Harris said.

Among the officials participating in the ceremony were Member of Parliament for North West St. James, Dr. Horace Chang, who read the National Heroes Day message from the Leader of the Opposition; Minister of Labour, Social Security, Agriculture and Fisheries, Hon. Derrick Kellier, who read the Prime Minister’s message; President of the St. James Lay Magistrates Association, Claudette Bryan, who deputized for Custos Rotulorum, Ewen Corrodus and read the Governor-General’s message.