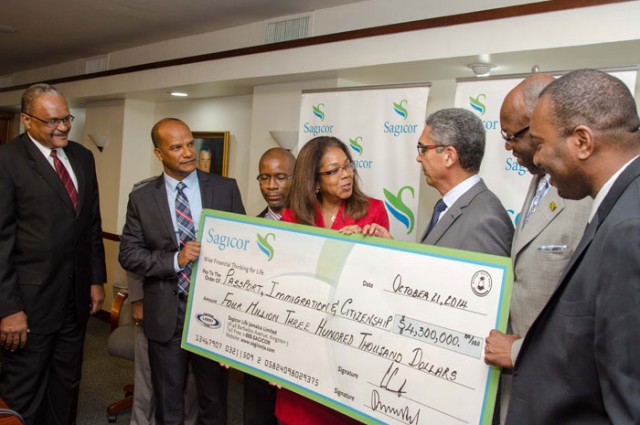 KINGSTON, Oct. 21 (JIS): The country’s preparedness against the Ebola virus will be further boosted with the acquisition of a state-of-the-art thermal scanning machine, at a cost of approximately $4.3 million (US$30,000).
Capable of detecting elevated body temperature, the machine is being acquired by the Passport Immigration and Citizenship Agency (PICA), with funds provided by Sagicor Life Jamaica Limited.

The scanner, to be placed at the Sangster International Airport in Montego Bay, which is recording the largest number of incoming passengers, is being sourced from Canada. It is expected to be acquired and installed within four to eight weeks.

Mr. Byles indicated that Sagicor’s gesture results from its concern about the possible threat Ebola poses to Jamaica’s economy and citizens’ welfare.

“Not only must we be alert and sensitive to the threat, as I think we are now, but we must be practically prepared to manage it, should it reach our shores. Therefore, Sagicor wants to take a practical step towards making us more prepared by funding the purchase of the machine…designed for mass screening in public areas, like our airports and seaports,” he said.

Mr. Byles said the machine should augment the hand-held fever temperature machines, four of which have already been acquired by the Government, through the Ministry of Health.

He appealed to fellow private sector corporate entities and business interests to “step up and make a contribution
to this effort.”

Meanwhile, Mr. Bunting welcomed Sagicor’s donation, pointing out that Jamaica’s defence against Ebola and other infectious diseases “is growing and expanding our partnerships and our preparedness, as the fight is not (one) for the Government alone.”

“This move by Sagicor shows their enlightened approach to corporate responsibility and governance. This machine will go a significant way in supporting the immigration and health officials, who are working very hard to protect our borders and to prevent Ebola from being introduced to our shores,” the Minister said.

He also indicated that the Government will be moving to see how quickly additional thermal scanners can be acquired, adding that their ability to record the temperature of a stream of persons, “will be much less of an obstacle to the free-flow of passengers through the airport terminal.”

Health Minister, Hon. Dr. Fenton Ferguson, in welcoming the contribution, said the Ministry is “very happy that
Sagicor, as a corporate entity, is able to respond in this manner.”

Dr. Ferguson said as a result of resource constraints, “we are going to have to depend on the corporate community and others to supply these (much) needed pieces of equipment.”

For her part, Mrs. McDonald said the contribution shows not only the relationship with the private sector, but highlights some of the work that (the) officers at PICA have done.

She also commended the initiative of the officers who made representation for the thermal scanner’s acquisition, and sourced background data on it, after seeing it in operation while on training overseas recently.