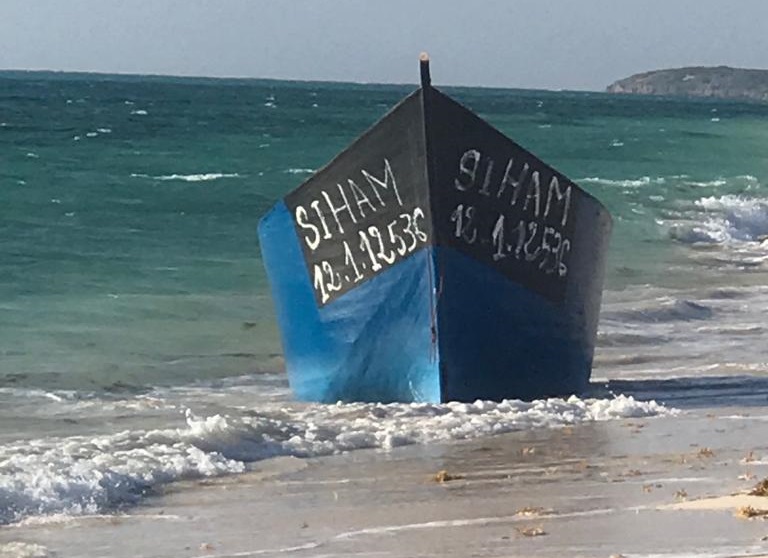 #TurksandCaicos, April 14, 2021 – The boats from nearby, embattled Haiti just keep on coming to the Turks and Caicos Islands and so do messages of warning from officials.

“The public is reminded that it is an offence to harbour or assist illegal persons and that persons found guilty engaging in such activities are liable to a fine of US$20,000 or a term of imprisonment of four years, or both in accordance with the Immigration Ordinance 2018 Revised or any law,” said a Ministry of Immigration statement which also confirmed the illegal landing on Monday April 12.

“The Ministry of Immigration, Citizenship, Labour and Employment Services and the Immigration Department of the Turks and Caicos Islands, would like to advise the general public that during the early morning hours today 12th April 2021, an illegal Haitian vessel made landfall on the Island of South Caicos.

The vessel which was found abandoned, was located on the beach area in close proximity to Sail Rock Resort.”

The landing in South Caicos was new; mainly smuggling operations end in Providenciales, which is the bustling economic center of the Turks and Caicos.  This time, the country’s fishing capital was likely more of a sure bet or a navigation mistake.

“It has not been determined on the number of persons that might have been aboard, however, the search is ongoing. These searches are being done by the Police and Immigration with the assistance of partners, DECR and Environmental Health

Officers are also monitoring both the sea and airport, as a precaution.”

A search is now on for those who would have been on board the vessel and there is no telling who or how many that could be. Children, infants, women even illegals from other countries including Syria, Sri Lanka and Guyana have all be caught on these dangerous people smuggling missions.

Minister, Hon. Arlington Musgrove in commenting on this incident stated, “Maritime smuggling operations are dangerous and too frequently end in tragedy and death at sea. There are many different reasons that migrants attempt such unsafe voyages at sea, but none of them are worth the risk of life. The landing on South Caicos is a further indication of the abuse of our borders by persons and this is something that we will not entertain”.

Now, the authorities are hoping for help from residents of the quiet community.

“…the public is also requested to provide the Police with tips or any information related to this or any other illegal landing. We encourage the public to submit information or tips anonymously in English, French or Spanish either to www.crimestoppers.tc or on Facebook as a fan of Crime Stoppers Turks & Caicos. Crime Stoppers tips are received in the USA.”