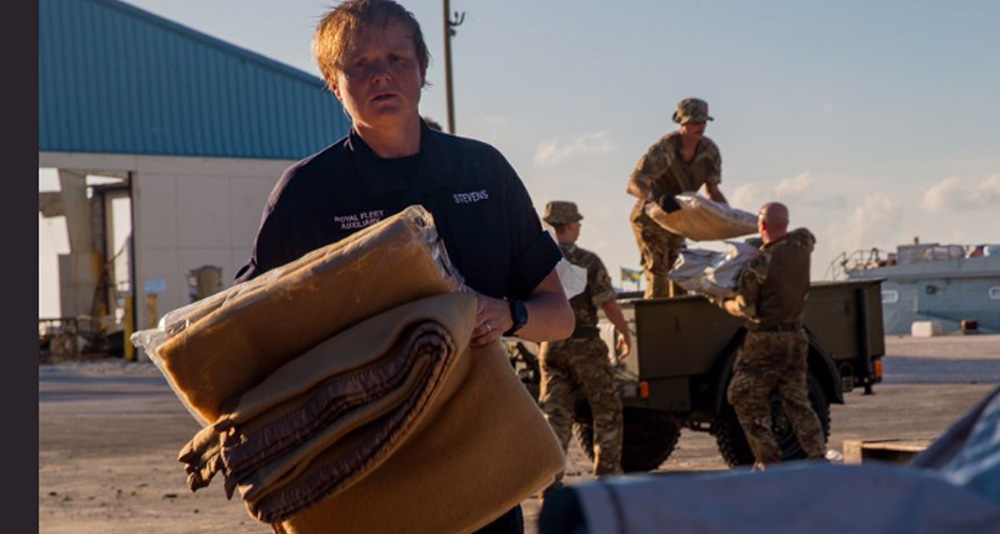 #TheBahamas, September 6, 2019 — Three children are rescued , supplies are delivered and equipment is being rolled onto Abaco courtesy of stellar support from the United Kingdom for The Bahamas.

Ready for anything is what the crew of the RFA Mounts Bay, a UK auxillary ship, touts as among its mantras or hashtags.

The team explains there has been the training to prepare them for moments and disaster like the one unleashed on the northwestern Bahamas by Hurricane Dorian which pounded some of the islands earlier this week.

Significantly, three children and a person injured in Elbow Cay, Abaco were all assisted by the RFA Mounts Bay.

From a press release at the UK Royal Navy website, there was this:  The Wildcat also conducted a casualty evacuation of a woman, her two children and a baby to Nassau. The helicopter crew comprised Flight Commander Lieutenant Lee Holborn, Flight Observer Lieutenant Keith Webb and medical officer Surgeon Lieutenant Rebecca Miles.

Surgeon Lt Miles said: “The children were in a poorly condition and required immediate medical care. It was hugely rewarding to use my training and skills to provide essential and immediate life-saving care to this family.”

Magnetic Media borrowed the photos and information from the RFA Mounts Bay twitter page in order to show the kind of humanitarian aide which is functioning in The Bahamas.

Images, like the ones shared by the RFAMountsBay team are missing from the steady stream of reports emanating out of Abaco by government, civilians and news broadcasters.

Magnetic Media has been consistently requesting imagery to show what is happening in the way of help and relief to the thousands of residents whose lives have been turned upside down by the hurricane.

UK Foreign Minister, Lord Tariq Ahmad and the UK Foreign Office are following the efforts, commending the MountsBay team for excellent work in supporting The Bahamas.

“We’re here to work very closely with the Bahamian Government to provide relief items through RFA Mounts Bay through the use of its helicopter and preloaded stores on board.”

National Security minister of The Bahamas, Marvin Dames had highest commendation for RFA Mounts Bay which is working with the Royal Bahamas Defence Force in the Abacos.