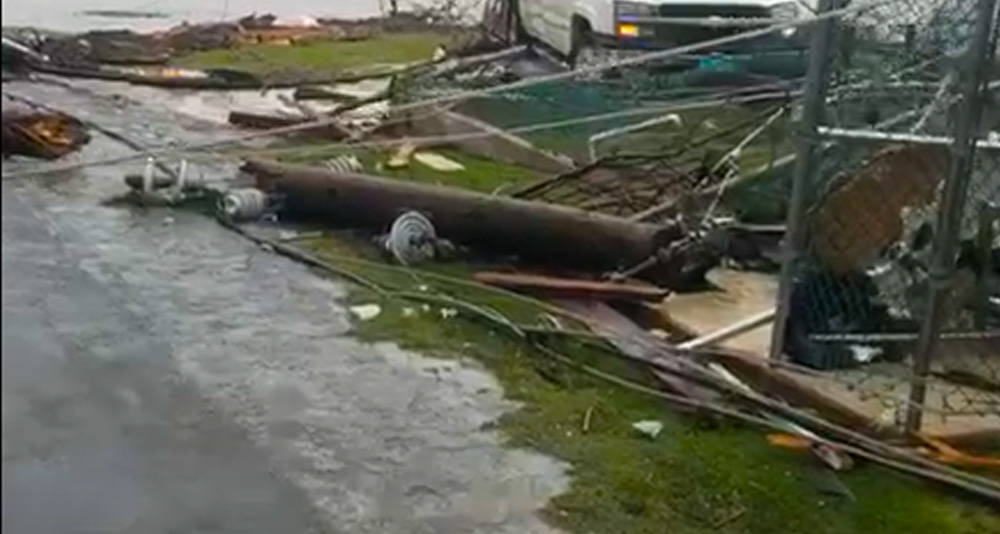 #TheBahamas, September 6, 2019 — In a season where Bahamas Power and Light, BPL – the country’s electricity provider – is challenged to prove its consistent reliability, comes a new hurdle in the Abacos created by the region’s most horrific hurricane.

Little damage is reported in the south of the island, but central and north Abaco were decimated and the utility infrastructure was smashed in the fury of Sunday and Monday’s Hurricane Dorian.

“I’m very optimistic. I think, coming in from Sandy Point north to Wilson City, clearly we do see poles down but the majority of the infrastructure is intact. So it’s really good news for those in the south. We can get those poles – less than 100 of them – we can get those replanted, get the conductors back up and bring in some smaller generation assets and repower the south fairly quickly,” said BPL CEO, Whitney Heastie who led a 19-member delegation.

However, for areas like Marsh Harbour, Dundas Town and Murphy Town, the prognosis is dire.

“The recovery can start pretty soon if we start with the south, because they had minimal damage coming from the south. Central and North? We’re talking about months. Of course, there are provisions for outside help, but it’s going to be…I mean, some areas can take – in my estimation – some areas can take up to three, four months, or perhaps longer,” said Marvin Green, Assistant Manager of Distribution, BPL Abaco.

From the BPL statement issued on Thursday:  After early assessments, Dr. Moxey said the initial budget estimate for recovery is somewhere between $25M to $30M. “We have infrastructure, we have resources we have to bring to bear and that’s the bill,” he said, adding that he had indicated to Minister of Works the Hon. Desmond Bannister that the assessment trips would result in an initial budget.”

BPL Chairman, Dr. Donovan Moxey and BPL CEO, Whitney Heastie led the delegation of 19 people on Wednesday (September 4) which had as its two main missions; assess the damages and locate BPL staff.

Chairman Moxey is optimistic about work in the south.

“The power plant has fared fairly well. There are one or two things that we do have to do in terms of cosmetic (corrections) but in terms of the engines, they’re all fine. They’re ready to go. The concern would be more around the load, because the engines’ minimum is more than the demand is right now,” he said.

Mr. Green said the damage caused by Hurricane Dorian, which is believed to have spawned tornadoes in addition to rushing, raging surge waters is far worse than hurricanes of the past, like 1999’s Hurricane Floyd.

“I never thought I would see something that made Hurricane Floyd look like child’s play. The winds – it was horrific. The weight and the force and the power of it. “Basically, right now, it’s hard to identify the landscape in some areas…because the structures that used to be there are no longer there. “Eighty to ninety percent of our infrastructure from Central Marsh Harbour going north is compromised. It’s going to be a long recovery.”

Many are saying Abaco in inhabitable, still Mr. Green reminded of the Caribbean region support which will take its cues from BPL when it comes to support.

The BPL statement:  BPL has partnerships with suppliers, energy partners and even government agencies in the US, CARICOM and others – plus a network of former employees with skill sets we can use – and with the right complement of equipment and personnel, we believe we can bring South and even some parts of Central Abaco back to power within a month.

“So, it’s really good news for those in the south. We can get those poles – less than 100 of them – we can get those replanted, get the conductors back up and bring in some smaller generation assets and repower the south fairly quickly.”

A team from BPL returned to Abaco on Thursday to complete the assessment work.  The electricity company explained it counts this hurricane restoration in Abaco as urgent despite the current objectives to boost capacity in New Providence.

“When you look at The Bahamas economy, Abaco is number three in terms of what it generates for the economy, so getting Abaco back up and running, there’s no question the government is committed to doing that as quickly as possible. “The good thing is, too, we have a lot of international support, and so we’re going to leverage all of that, everything we can,” Dr. Moxey said.

The initial BPL assessment team did not visit the island empty handed; food and water, health and medical supplies were delivered to BPL team members and their families.