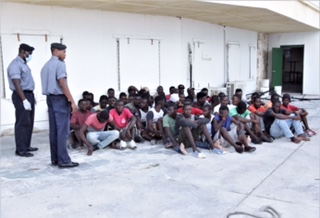 Bahamas, July 3rd 2017 – Nassau – Another Haitian sloop has been intercepted by the Royal Bahamas Defence Force, this time in Exuma waters. According to reports, over 60 undocumented Haitians were apprehended upon a wooden vessel in the Great Bahama Bank, west of Exuma early yesterday morning.

58 males, 10 females and a child were caught at around 2am, as a Defence Force surveillance aircraft sighted them in the Bahamian territory. The migrants were then all transported to the capital and turned over to Immigrations officials for repatriation.