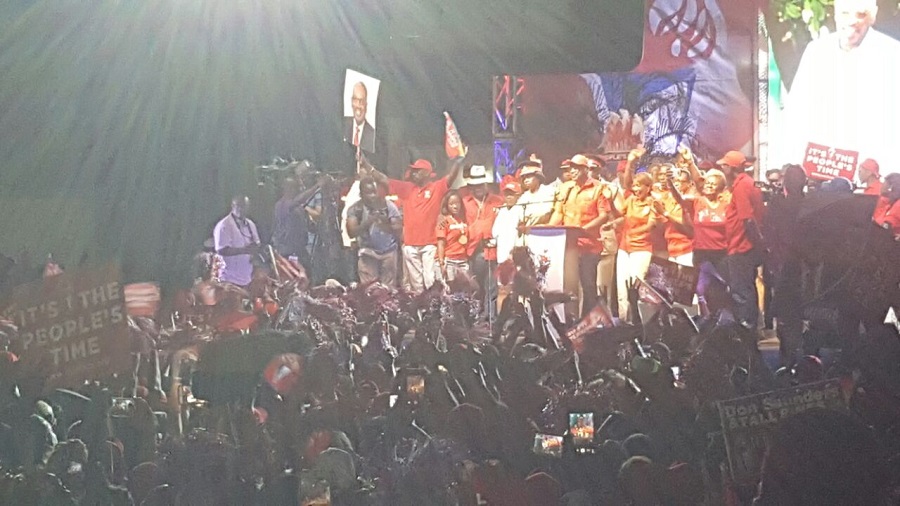 Bahamas, May 11, 2017 – Nassau –  It is an historic defeat and it gave the Free National Movement the largest victory at the polls ever recorded for The Bahamas, unofficially taking 34 of the 39 seats; one still hanging in the balance … it also saw the FNM win with the youngest candidate, Travis Robinson at the age of 22 sounding beating veteran, Dr Bernard Nottage in Bain and Grants Town and it also saw, the two major islands almost completely swept by the FNM – Grand Bahama giving Hubert Minnis and his slate 100% of the seats; Nassau so far only giving the PLP, one constituency.

The Fox Hill seat held by Fred Mitchell of the PLP was into recount mode late into the night.  All of this was done by a man labeled too weak to lead the country but today, Hubert Alexander Minnis will be sworn in as the fourth Prime Minister of The Commonwealth of The Bahamas.  Minnis in what is described as a humble victory speech, explained that by 9pm, former Prime Minister Perry Christie called to concede defeat and congratulated him on the resounding win.

Minnis stuck with the party theme and repeatedly reminded the thousands of people gathered at the QE Sports center site last night, that it is the People’s Time.   Giants in the PLP were brought down in the 2017 run-off, including Perry Christie who lost Centreville after a 40year run as the Member of Parliament to Reece Chipman of the FNM by 125 votes, unofficially.   Obie Wilchcombe who has held West End Bimini since 2002, no longer has it; Pakesia Parker-Edgecombe is the new MP for that constituency which spans two islands.

The self proclaimed, Potcake, Leslie Miller of the PLP has long been a favorite for Tall Pines, but today attorney Donald Saunders for the Free National Movement is the representative for the constituency which has been plagued recently by a still burning city dump fire.  In the end, the PLP managed to hold four seats – one in Nassau by Glennys Hanna-Martin in Englerston; Cat Island, Rum Cay & San Salvador by Philip Davis; Picewell Forbes still has Mangrove Cay & South Andros and Chester Cooper keeps Exuma & Ragged Island for the Progressive Liberal Party.

The Democratic National Alliance or green party attracted even less votes this time around, and it was clear that party leader, Branville McCartney, seen in media interviews after the count, was shaken by their loss.  The DNA was unable to secure any seats despite running 35 candidates.

Later, at 5pm, Dr. Hubert Minnis will be sworn in by Governor General, Lady Marguerite Pindling as Prime Minister and the FNM will resume governance of The Bahamas.  Ironically, it is the second time a man by the name of Hubert Alexander will run the affairs of the country as Prime Minister.