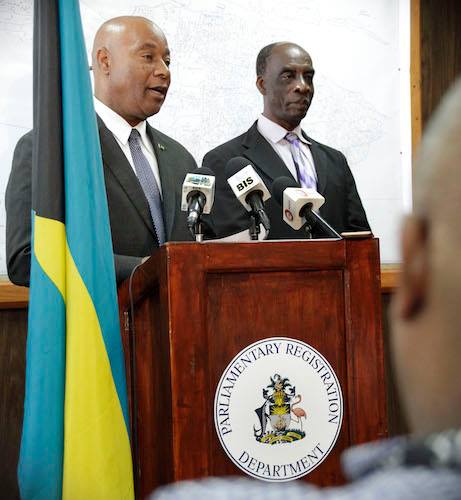 Bahamas, May 19th 2017: Voter turnout at the 2017 Bahamas General Elections saw an 88 percent out of the 181,000 registered to vote. Charles Albury, acting Parliamentary Registration Commissioner speaking at the press conference held post the electoral process this week, said he could only provide a percentage, as he did not have the exact figures.

The acting commissioner provided a breakdown of the independent observer report, which he says, states “no reports of irregularities or fraud” during the elections. He noted that the team called for greater use of technology in the advanced polls, as it could have been used to eliminate the long lines and uncertainty among persons wishing to cast their ballots before Election Day. The commissioner says he will “prepare a full report for the Secretary General, which will in turn be provided to the government”. He says based on these findings, it will be determined the extent to which reform is needed at the Parliament Registration Department.

Mr.Albury did not stay too long on the matter, as he says his department’s focus is now the upcoming Local Government elections, which is carded for sometime in June.

As to the preparation for the local government election, the acting commissioner says the process is the same. Both men were questioned on the total cost of preparing for the polls, however, neither could provide a figure, as they say those figures were also still in tally. It’s expected that Charles Albury will remain acting commissioner until further notice.