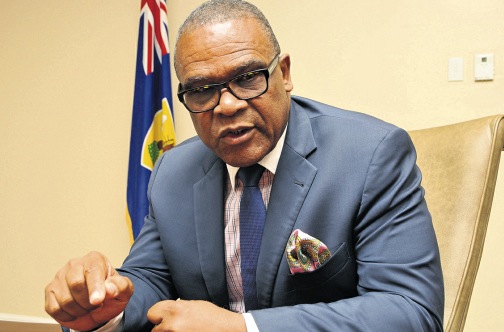 Providenciales, 02 Mar 2016 – The PNP Administration is proposing to spend $252 million dollars in the running of the country for 2016/2017 and according to the Finance Minister, Hon Washington Misick there will be no new taxes this financial year.

During House of Assembly meeting on Monday the Minister shared that the PNP Government is proposing to spend 4% more on recurrent expenditure and shared that earnings for TCIG is forecast to be $256 million. Based on these projections, the country will generate in the upcoming fiscal year a $4 million surplus.

Hon Washington Misick reminded that the FSPS or the Financial Strategic and Policy Statement was tabled in the House since last December and on Monday, the Appropriation 2016-2017 Estimates was laid on the table.

A whopping announcement came when the Finance Minister shared that in addition to the salary re-grade which resulted in significantly higher salaries for many in the civil service; another 2.5% increase in wages is planned for public workers. Pensioners will also get more money says Minister Misick, retired legislators will be getting more money.

Non pensionable employees released in 2012 will get some remuneration; financial boost will come, said the Minister for crime fighting with 20 new recruits at a cost of $900,000; more money will go to indigents under social services.

More money will go to environmental health and emergency services, an on the job productivity management team under the Ministry of Finance will be established and $1.5 million dollars has been allotted to give incentive to small business development, and an extra $250,000 is dedicated to the Center for Entrepreneurial Development.

There is also a 19% reduction in non-recurrent expenditure according to the Minister, which he put at $8.8 million.

“Mr. Speaker the significant reduction this is due to reduced debt service fees, as the $170 million bond has been retired.”

The UK guarantee loan is now paid off, the House of Assembly wrapped up debate after 10pm on Monday night.