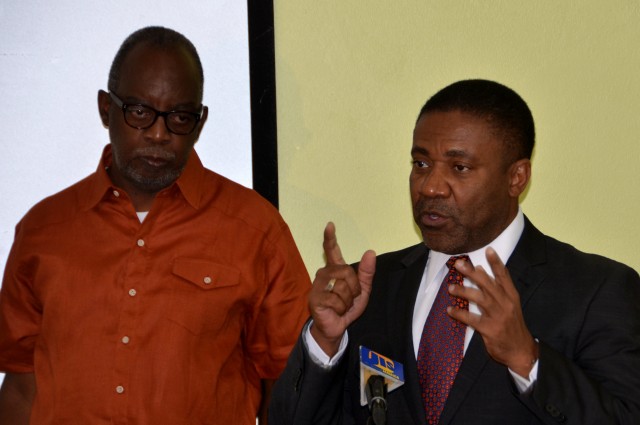 KINGSTON, Feb. 16 (JIS): The Government is looking at equipping the police force with tablet computers as part of measures to boost their crime-fighting capabilities.

Science, Technology, Energy and Mining Minister, Hon. Phillip Paulwell, said there is a request from Police Commissioner, Dr. Carl Williams, for the provision of tablets for law enforcement personnel.

“We are…contemplating…the acquisition…of (an initial) 1,000 tablets… (and) over time (to acquire additional devices) for the entire security force to enable them to have access to the latest (crime fighting) information,” he said.

He said the tablets will provide the police with ready access to data. “It (shouldn’t) take an officer more than a couple seconds to (locate) the details of a car (or) to be able on questioning a (person), to acquire information. We recognise that there are some programmes that will enable us to have quicker access to… (databases containing those details),” he pointed out.

Minister Paulwell noted that the Ministry, through the Universal Service Fund (USF), has been able to enhance the JCF’s operations by ensuring that the force has an “effective” web presence.

He noted that there are several available technology solutions which the force could utilise to enhance its work.
“There are features, now, that will enable the security forces to detect the firing of a (weapon anywhere) across the country… and to pinpoint the location,” he informed.

He also highlighted the advantage of using closed-circuit television (CCTV) cameras, noting that the technology has been utilised to good effect in other countries.
“I hear people complaining about privacy, but if you are not doing anything wrong, you shouldn’t be afraid of your face being shown up in public,” Minister Paulwell contended.

“It’s going to be one of those efforts in joined-up Government that we are going to be pursuing. I believe that information and communications technologies (ICT) must be pervasive across the entire Government, for us to perform much more effectively,”
Mr. Paulwell added.