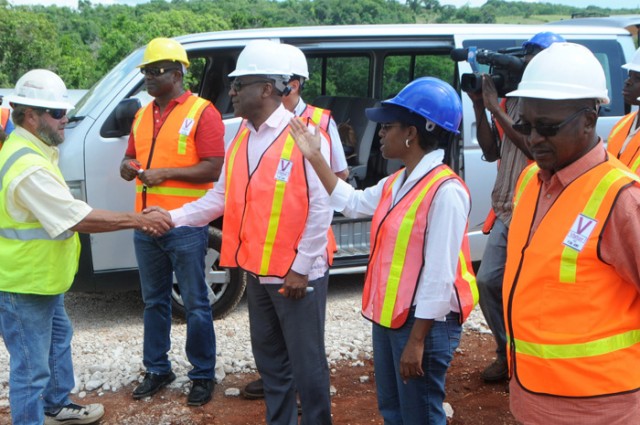 MONTEGO BAY, Nov. 9 (JIS): Minister of Science, Technology, Energy and Mining, Hon. Phillip Paulwell, said Jamaica has attracted an investment of over $20 billion in renewable energy projects, which is creating jobs for thousands of Jamaicans, while diversifying the energy sector.

“Our business as a Government going forward is to create jobs. We have the skill sets here where we are going to train our people where in time, all the jobs are 100 per cent occupied by Jamaican workers,” he said.
The Minister, who was speaking to JIS News during a tour of the 36.3-megawatt BMR Jamaica Wind Farm in Malvern, St. Elizabeth, last week, said the projects are in keeping with the Government’s push to lower the cost of electricity for Jamaicans.

“We have promised the people of this country that we are going to do everything we can to lower our energy bill. Now we have BMR here with an investment of nearly $11 billion, the Government has an additional investment in Wigton III in Manchester for over $5 billion and another investment in a 20-megawatt solar facility…the largest in the Caribbean…in Clarendon for nearly $6 billion,” he pointed out.

“Energy security is the great game changer. We should all understand and appreciate the significance of what is happening. These are real solid investments that will impact on our long-term future and security. These are real exciting times for Jamaica,” he added.

Mr. Paulwell said that with Jamaica’s improved business ranking, investors are now realising that the country is a good place to do business, and going forward, the Government will be doing constant reviews of its position with the aim of attracting more energy projects.

BMR Jamaica Wind Farm, on completion, will be the single largest privately funded renewable energy project in Jamaica and one of the largest in the Caribbean. It is slated for completion by the end of March 2016.
Expansion of the Wigton Windfarm (Wigton III) is expected to cut oil imports by 37,000 barrels per year, and achieve annual savings of more than $200 million. Some 31,500 households will benefit from the US$45 million project, on which operations are expected to start in early 2016. A total of 125 jobs are to be created during the construction phase.

WRB, the Tampa, Florida-based developer, which is undertaking the 20-megawatt solar facility in Clarendon, is promising to deliver clean, reliable, renewable energy at a stable price to Jamaicans for decades to come.
The facility will power more than 20,000 homes while reducing fuel imports by more than three million gallons each year.