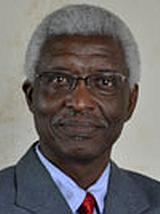 Providenciales, 15 Feb 2016 – Edward Smith, the former candidate for the People Progressive Party in 2012 is running in the 2016/2017 General Elections on the Progressive Democratic Alliance ticket and guess what, he told Magnetic Media that he is again going to offer in District seven; Cheshire Hall& Richmond Hills.

This electoral district is the very constituency where the candidate, who did not denounce US citizenship before offering for the seat, forced a by-election. Smith is among the eight candidates already named by the Skippings led PDA.