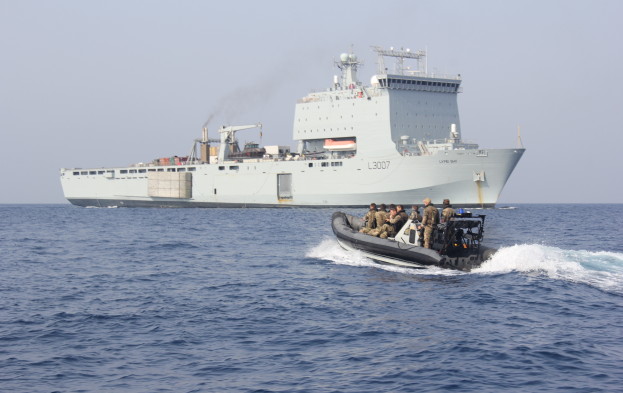 Providenciales, 30 Jul 2015 – The Royal Fleet Auxiliary vessel, the Lyme Bay is set to make port in the Turks and Caicos Islands and the amphibious support ship arrives this weekend in Grand Turk.

With an impressive armament including an anti-ship missile weapons system, two 30 mm cannons and at least 10 machine gun batteries, the 16,000 ton vessel, which is stationed in the area for the duration of the hurricane season, is staffed with 60 crew, 23 Royal Navy sailors, 27 Royal Marines and a team of engineers who specialise in disaster relief. The RFA Lyme Bay will host some training while berthed in the TCI;

Governor Peter Beckingham said: “The RFA Lyme Bay’s visit is a clear demonstration of how the UK supports the peoples and governments of its Overseas Territories.”

While the state of the art vessel will be welcomed, islanders have long held the view that there should be a British ship constantly in TCI waters to fend off illegal migrants and poachers.

His Excellency said rescue training exercises with the local search and rescue team and talks with delegations from the police, fire department, ambulance service and hospitals on how the vessel can assist with disaster relief efforts are all planned.