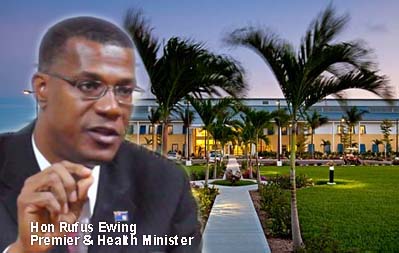 Providenciales, 03 Jun 2015 – Government said it would clear up back monies owed to InterHealth Canada to ensure there was no disruption in service to the general public.

This information surfaced during May 12, 2015 House of Assembly Debate, where the Premier admitted that payments to Interhealth Canada were not up to date, due in large part to discrepancies in the billing to government. A parliamentary questioned leveled at the Nation’s leader and Health Minister by the Opposition Leader revealed that TCIG is behind on the clinical payments but not the infracal payments.

Premier, Hon. Dr. Rufus Ewing: “The delays were due mainly because there were some discrepancies and due to lack of information and there was some dispute in regards to the invoices, those have been clarified – partially, but to the satisfaction that they payment – we think it is prudent that the payment be made so as to not put in jeopardy the provision of the clinical services at the hospital to the people so that all individuals can get their clinical care. Nonetheless, we still will be in search of additional information that is required to make the necessary adjustments.”

In total, TCIG pays nearly $4 million per month for the clinical and infracal costs for our TCI Hospitals combined. The Premier said the invoices in dispute are likely to change and that the reconciliation process takes place quarterly. During that Question and Answer period on May 12, it was also replied that the Draft Immigration Bill would be tabled in parliament before the end of June.