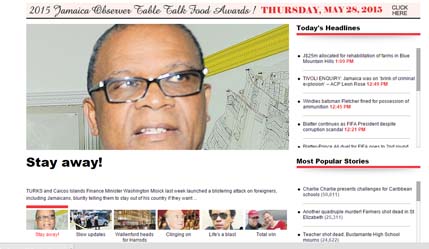 Providenciales, 29 May 2015 – Negative backlash as the comments made by Minister Washington Misick and supported by some House members during a private members motion debate on May 12, is reaping anti-foreigner headlines from at least one CARICOM country; Jamaica. The Jamaica Observer has given headline billing to the comments the Finance Minister made which slammed resident foreigners celebrating their cultures overtly in the Turks and Caicos. At the time, the Minister imagined there would be some fall out, but proceeded with his contribution anyway.

“Personally as I say I’m a politician, but at my age, I don’t give a flying pheasant about what people think, (laughter) I am here to do a job, and I gon do that.”

The Observer, says Minister Washington Misick veered off of the motion which had to do with a cleaner Turks and Caicos, to lash out at what he called, ‘Haitian Flag Day, Jamaica Day, Bahamas Day…’ saying he does not support the events and believes those who do or want to host them should go back home. The article has so far spawned 70 comments, some in support of the position but most in disagreement with the former Chief Minister who is labeled as xenophobic and insecure among a string of other more harsh characterizations. Some have called on the Premier and Minister of Tourism to speak to the comments by their cabinet colleague. At least one Progressive National Party advocate has written to media about the position expressed by Minister Washington Misick; that letter to the editor denounced the comments and called the PNP Administration invisible and out of touch. Other members from the PNP side were also heard in the House of Assembly audio calling for the events to be blocked and recommending that these Caribbean ex-patriots celebrating or having these events take InterCaribbean Airways home. While there are some TC Islanders not in the House of Assembly who agree with this stance, Minister Misick never made it known which group, if any, he was representing in his controversial remarks.