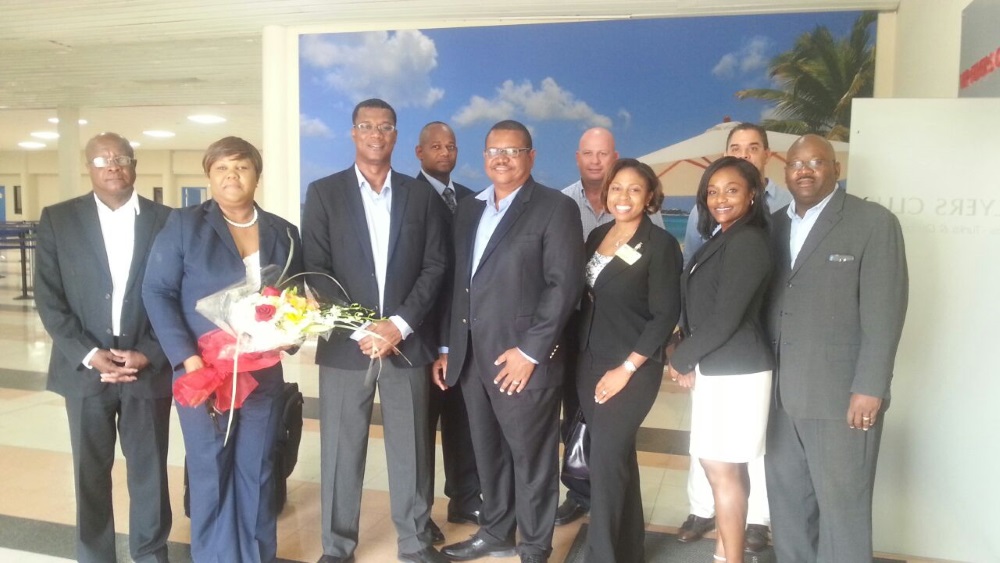 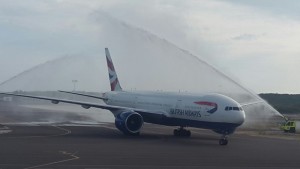 Providenciales, 30 Mar 2015 – The largest regular commercial airliner touched down late yesterday at the Providenciales International Airport; and not only does the 777 initiate a new route between the Turks and Caicos and Antigua&Barbuda but according to officials, it pushed the PIA to a service upgrade. The British Airways flight between TCI and The Bahamas has changed to being a BA flight between the Turks and Caicos and Antigua on Sundays; Minister of Tourism Porsha Smith led a contingent on the inaugural flight which was welcomed shortly after 5pm with a water canon salute.

“This airlift offered by British Airways will enhance and provide additional access for Europe and provide much needed linkages between our Caribbean neighbors. This service will provide, going forth, new and exciting opportunities that indeed the Caribbean is the world leader in Tourism and that the sustainability of our product is viable and the longevity of our product depends on our stewardship.”

Antigua similarly, held a send-off ceremony at its VC Bird International Airport, where its Tourism Minister Asot Michael sent greetings and heralded a new beginning between our nations. The TCIAA was represented on the flight by Terminal & Marketing Manager Lavern Reynolds, here’s Gordon Burton, Chairman of the Airports Authority.

“From the time I think we were advised, I think last year, that BA was changing its schedule using the 767, and changing it to Antigua using a 777 we immediately had to put certain things in place to make it a reality. I am happy to be here today with Mr. Smith and the Airports Authority because we worked very hard because we had to ‘up’ our fire and Rescue; you know, we had to ‘up’ a lot of things.”

Premier Rufus Ewing, Executives of the Hotel and Tourism Association including president Michel Nuetelings and Stacy Cox with CEO of the TCIAA, John Smith and Chairman and Director of the Tourist Board – Kingsley Been and Ralph Higgs – were all on hand for a press conference held at the VIP Flyers Club.