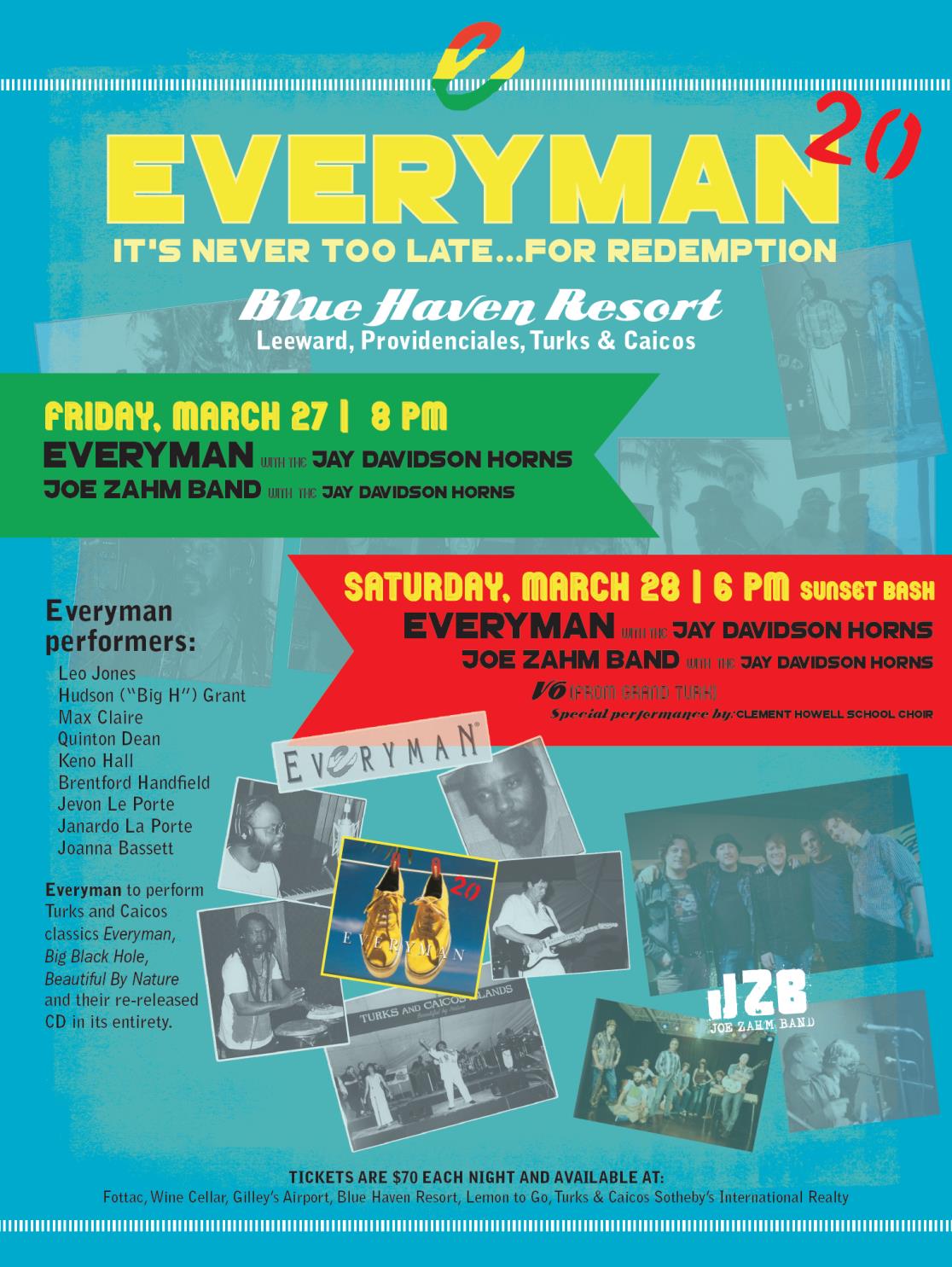 Providenciales, 16 Mar 2015 – On Friday and Saturday, March 27 and 28, the mid 90’s sensation, EVERYMAN, will re – unite for two concerts. Lead singer and songwriter Leo Jones, and bandleader songwriter Hudson (Big H) Grant join fellow founding member Max Claire, Quinton Dean, Brentford Handfeld, Janardo and Javan Laporte , Keno Hall and Joanne Bassett as EVERYMAN headlines two shows on the beach in front of SALT, at Blue Haven Resort in Leeward. They will be joined on the bill by Joe Zahm Band, which is led by Everyman producer and songwriter Joe Zahm, whose music pays tribute to the profound influence of Leo, H and Max as they evolved from Tropical Soul into EVERYMAN. JZB will be joined by David Bowen on percussion. The Jay Davidson horns, will join both acts. Jay has played with many of the finest acts in the world, including Maxi Priest, Sly and Robbie, Chicago and Stevie Winwood, and will be bringing the power of the brass. The Friday show will start at 7 PM and the Saturday show will start at 6 PM. The Saturday bill will include Grand Turk’s V6 along with a special performance of Beautiful By Nature, performed by the Clement Howell school choir.

The concerts coincide with the release of the EVERYMAN 20 – a beautifully packaged Double CD, consisting of the original Everyman CD (featuring Everyman, Hey Brother Hey Sister, Big Black Hole, Joy Peace and Light, Caribbean Soul, To Walk with Kings) that took TCI by storm 20 years ago, along with a bonus disc highlighted by the original versions of the TCI Classic, Beautiful By Nature, and cult sensation Big Black Hole, along with two great previously unreleased tunes written by Joe, Big H and Quinton Dean, and recorded in Jamaica, where they were joined by Papa Stretch for the super catchy Inside the Groove and the great Jamaican singer Chavelle on Free Yourself. The bonus disc is rounded out by four JZB reggae songs, including their powerful version of Everyman.
States Joe Zahm: “I am beyond excited a long time dream will be fulfilled. When we were forced to part ways some twenty years ago we were all so disappointed, as had given the project our all. But we have learned that the songs, and the love behind them, stay with you forever. It truly is, never too late for redemption”.
Tickets are $70 and available at Fottac, Wine Cellar, Gilley’s Airport, Blue Haven Resort, Lemon to Go, Pork Shack and Turks & Caicos Sotheby’s International Realty. CD’s available at Fottac.