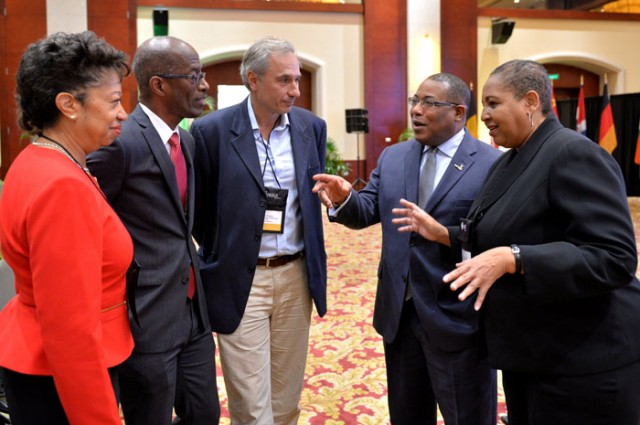 MONTEGO BAY, March 12 (JIS): General Counsel and Business Development Officer of Gruppo Campari, Stefano Saccardi, has credited his company’s rise to investing in Jamaica and acquiring one of the country’s top international brands.

Prior to coming to Jamaica, Mr. Saccardi said Campari was a small, though viable interest in Italy. Campari’s association with J Wray & Nephew’s ambassador brand, Appleton, has improved its profile on the international market.

As part of Campari’s expansion agenda, it is currently seeking to increase its investment in Jamaica through partnership with investors in the agricultural sector.
Speaking at the second Jamaica Investment Forum (JIF) at the Montego Bay Convention Centre, on March 12, Mr.

Saccardi said Campari is currently looking for molasses producers to source the product locally, with the aim of reducing the company’s molasses import bill.

Mr. Saccardi added that his company has a strong interest in sugarcane production, which is important to the manufacturing of molasses, a base product of rum.

“A strong co-operation with agriculture is very important for us, as ideally, we would love to have Jamaican molasses for our distilleries. Agriculture has potential here (and) needs to be improved. It is also a labour intensive business which could provides a lot of (employment possibilities),” he said.

Pointing to other possible investment partnerships and collaborations, Mr. Saccardi said there is need for more tourist attractions and suggests that the re-introduction of the Appleton Express from Montego Bay to the distillery would be a strong investment area.

He said that the linkages the Express provided with local communities, craft traders, and the Jamaica Railway Corporation made it lucrative. Co-branding with local multinationals, Mr. Saccardi noted, could also improve the country’s investment possibilities.

More than 130 potential investors from countries across the global are in attendance at the two-day forum, which is sponsored by JAMPRO, Commerzbank, Digicel Business and the Inter-American Development Bank (IDB).