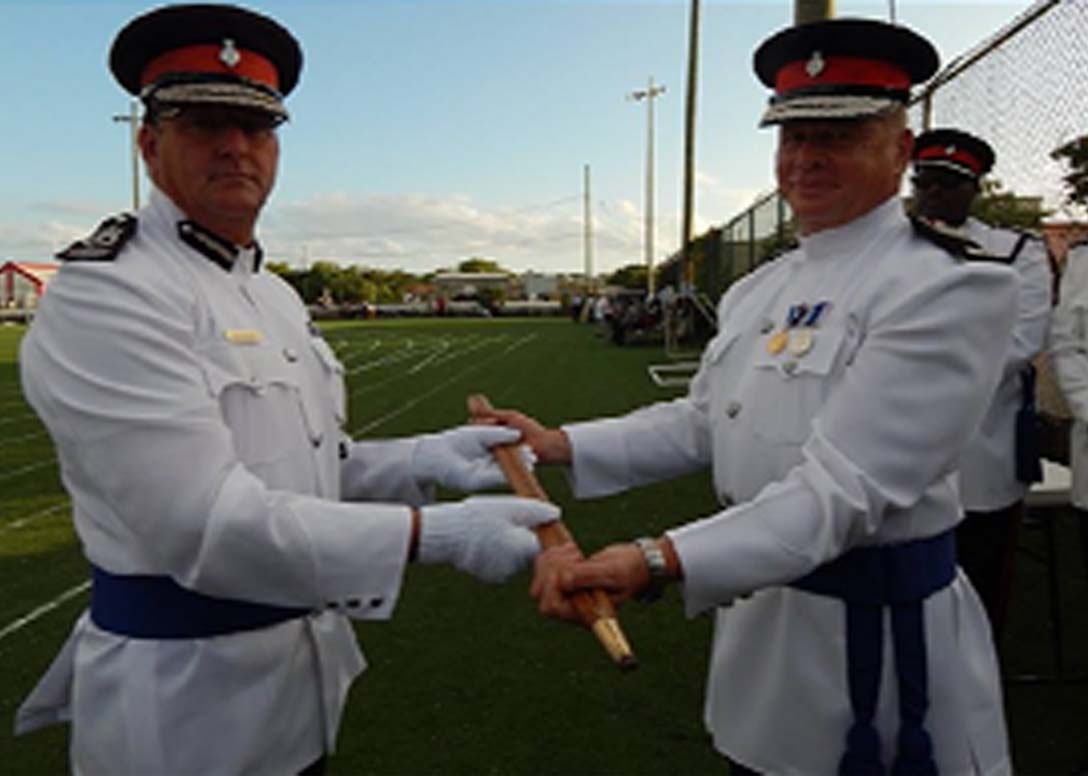 Providenciales, 13 Feb 2014 – An elaborate handing over ceremony for Grand Turk as the Turk and Caicos bid farewell to outgoing Police Commissioner Colin Farquhar of Canada to welcome James Smith of the United Kingdom. Opposition leader Hon Sharlene Robinson during the service offered welcome to the new police commish, her PDM Party had been vociferous about the performance and style of Farquhar, a few times calling for his resignation, yet the Party leader thanked him for the time and asked Mr. Farquhar to convey gratitude to the Canadian Government from the TCI.

Words for Commissioner Smith centered around appreciating the men and women who make up the Royal Turks and Caicos Islands Police Force. Hon Robinson said: “We are grateful that amidst the challenges you have come to these Islands and though you will find very quickly that there is much to do, we would like for you to take the time to get to know your men and women in the Organisation that you will lead – It is a small staff and quite achievable over a short period. It is important that you build a strong relationship with them. Equally important, we encourage you to simultaneously make every effort to meet and greet the people along the chain of Islands.”

The Change of Command Ceremony which was held at the HJ Robinson High School also featured Governor HE, Peter Beckingham who as the UK representative in country, heads up National Security and this includes the Police Force.

HE bid Colin Farquhar and his wife a warm farewell, and shared why he believes James Smith will do a stellar job in the islands: “I am delighted that we have been able and fortunate enough to secure someone with the range and depth of experience that Mr. Smith brings with him to Turks and Caicos. Running the police forces across large parts of London for the Metropolitan Police is one of the most demanding positions in Europe, and Mr. Smith has also got valuable international experience in both Hong Kong, another challenging environment, and Cayman. I have every confidence that Jim Smith will prove an energetic and inspirational leader for Royal Turks and Caicos Islands Police Force.”

Smith, who will lead the 280 officers of the TCI Police Force was selected out of a field of nearly 30 applicants; the decision to appoint Smith was described as unanimous.

Colin Farquhar had served since March 2011.