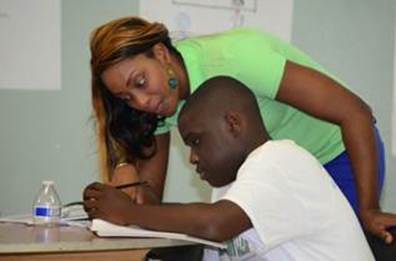 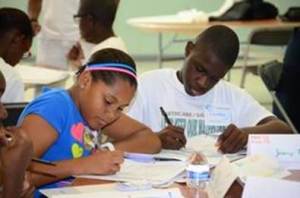 Grand Bahama, 16 Dec 2014 – (SAVE THE BAYS PRESS RELEASE) Anyone who thinks teens are not interested in studying hasn’t met some special students in Grand Bahama. More than 40 of them between the ages of 12 and 14 are trading Saturdays at the mall for Saturdays in the park, literally, preparing to be ambassadors for the environment.

The program called Youth Environment Ambassadors is funded by the fast-growing environmental movement Save The Bays and run in Grand Bahama by Save The Bays Director Joseph Darville with a group of assistants, including Rashema Ingraham, Jensen Farquharson, Javan Hunt, Nikie Severe, Robert Nabb and others. This year’s course includes special leadership training with Sharon Glover, a volunteer from North Carolina with Bahamian roots.

“When we arrived for the start of the program this year, we couldn’t believe it,” said Darville. “Nearly 80 students had signed up for the six week course and there were only 40 slots. And the first day, which was December 6, was incredible.” Initial work at a facility provided by the YMCA involved comparing the life of a tree to ecology of the planet. “When we went into the Garden of the Groves and they could see the trees and understand how it all revolves and evolves, how everything from limbs to leaves to the ants on the ground, were intertwined, it was if they had unraveled the secrets of the universe,” Darville said. “You have never seen such excitement and passion among young people eager to learn more. They were touching every part of the tree, asking a million questions. It was incredible.”

The purpose of the program is twofold – to help prepare young Bahamians for the future with jobs in the expanding blue and green economies that are projected to grow at rates greater than traditional jobs.
“But also we know that the real stewards of our environment are the young people who will be the conscience and caretakers of our precious universe,” Darville explained. And Ms. Ingraham agreed.

“Our young students are being prepared to protect, preserve and lead as stewards of the archipelagic Commonwealth with its abundance of unique and natural resources,” said Ms. Ingraham.

According to Tristan Rampersad, a second-year participant, “Similar to last year, I expected this first session to be fun, educational and to teach me even more about our environment,” he expressed. “I hope this knowledge can help me and others save our environment and to show everyone why it is so important.”