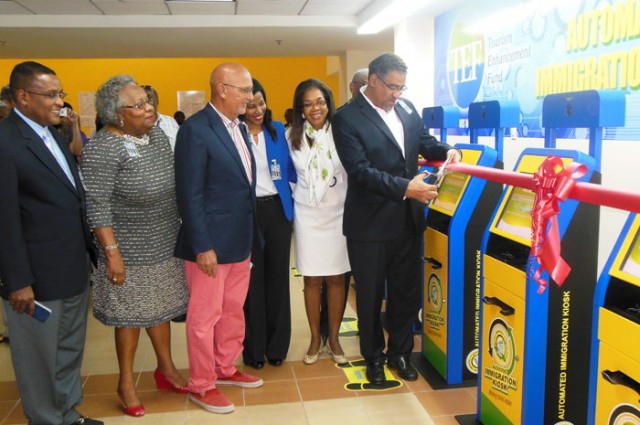 MONTEGO BAY, Dec. 11 (JIS): Ten automated immigration kiosks have been installed at the Sangster International Airport in Montego Bay, St. James, which is expected to significantly reduce the processing of airline passengers.

The establishment of the 10 stations brings to 15, the number of automated immigration kiosks now in operation at the island’s two major international airports under a US$2 million project, which is being funded by the Tourism Enhancement Fund (TEF). Five kiosks were opened at Norman Manley International in Kingston last month.

Tourism and Entertainment Minister, Hon. Dr. Wykeham McNeill, who commissioned the kiosks into service, said they are expected to reduce the processing time for travellers to less than one minute.

He informed that some 23,000 travellers are expected to use the facilities during the month of December.
The kiosks use an advanced passenger information system (APIS), which

Dr. McNeill said, is among the best in the world. Minister McNeill said that Jamaica is one of the first countries in the Caribbean to utilize it “and we are proud of that.”

The kiosks project involves partnership with the Passport, Immigration and Citizenship Agency (PICA), through the Ministry of National Security, in reducing congestion at Immigration and Customs during peak periods.
Dr. McNeill said the partnership, which started two years ago, resulted in the formation of a task force, which has been working on a number of projects.

He noted that as part of the initiative, keen attention has been placed on boosting the efficiency of the PICA through training and the use of modern technology.

“Last year, we were able…to remove the outgoing immigration from our airports…what we have been able to do is to safeguard our borders while at the same time…allow for the smooth passage of persons,” he said.
Meanwhile, Minister McNeill said work is continuing on reconfiguring the immigration form to make it more user friendly for the travelling public.

He said the revamping is being done in collaboration with various stakeholders led by the Ministry of National Security and PICA.