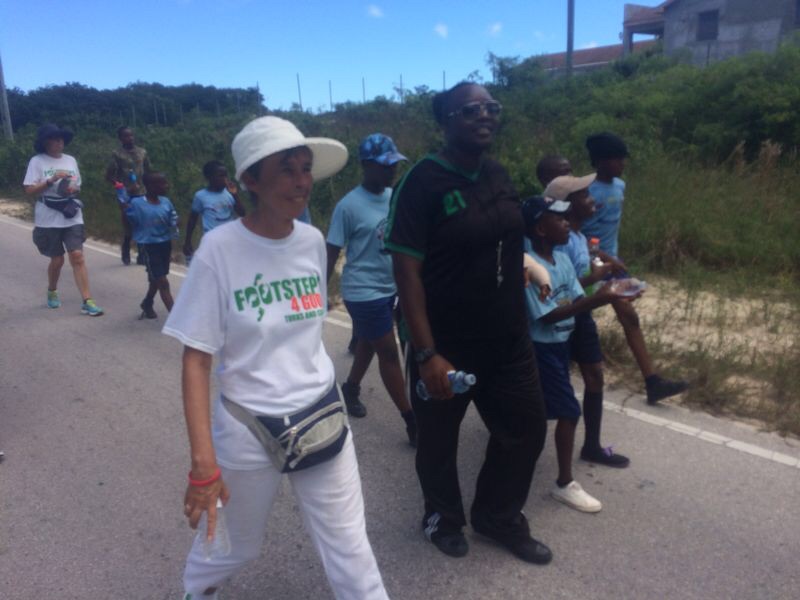 Providenciales, 5 Nov 2014 – Jill Beckingham, wife of the Governor, has raised over $25,000 for charities in Turks and Caicos over the last week. Jill’s Footsteps4Good walk across five of the six inhabited islands covered a distance of about 75 miles.

“The response from schools, communities and businesses far exceeded my hopes” said Jill after completing the final stretch of her walk with over 200 others last Saturday 1 November. “I was thrilled so many schools, from South, North and Middle Caicos to Providenciales, all participated. Special thanks too to Provo Road Runners, who were invaluable supporters, especially for the last day’s walk and run”.

“Apart from corporate sponsors, island communities went out to do their own fundraising. In South Caicos $1,500 was given in corporate sponsorship but a grand total of over $6000 was raised. This is the real message of Footsteps4Good, everyone can take part and make the event their own” said Jill

“The sponsors all demonstrated their commitment to good causes in TCI,” Jill said. ” Although the islands attract many of the most well-off tourists, there are still too many people here living challenging and difficult lives. I hope Footsteps will in a small way help to improve their lot.”