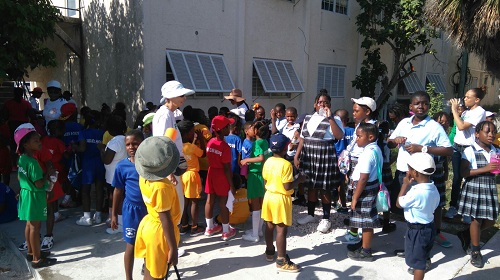 Providenciales, TCI, September 29, 2016 – Over 800 schoolchildren from Grand Turk took part in Footsteps4Good on Friday, 24 September, the walk started  in 2014 by Jill Beckingham, the Governor’s wife, to raise money for local schools and NGOs. 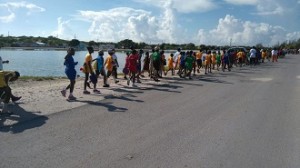 “It was wonderful to see such enthusiastic participation from the youth of Grand Turk in Footsteps” said Jill, ” with every main public and private school taking part, as well students from the Community College. In addition to the schools, a number of Grand Turk NGOs, including the Soroptimists, Red Cross, Cancer Foundation  and the National Museum, will receive funds from Footsteps.”

On Saturday 25 September a group of mainly adults took part in a walk or run from the gazebo outside the House of Assembly to the Cruise Centre, where local businesses and individuals provided a welcome drink and refreshments.

“One of the highlights for me” said Jill Beckingham “was the relaxed atmosphere, with people from all parts of Grand Turk’s community taking part and enjoying themselves in a healthy start to the day.”  On Sunday, 26 September,  Footstep4Good continued its island-wide journey to Salt Cay, with 25 visitors from Grand Turk joining with members of the local community and schoolchildren to walk or swim around part of the island, followed by a lunch of the local delicacy of whelk soup and sandwiches prepared by Miss Pat.

After walks in South, North and Middle Caicos during the week, Footsteps4Good culminates with a walk on Youth Day with schoolchildren from Clement Howell to the National Stadium, and the final 10km walk or run from the IGA to Blue Haven on Saturday morning 1 October.