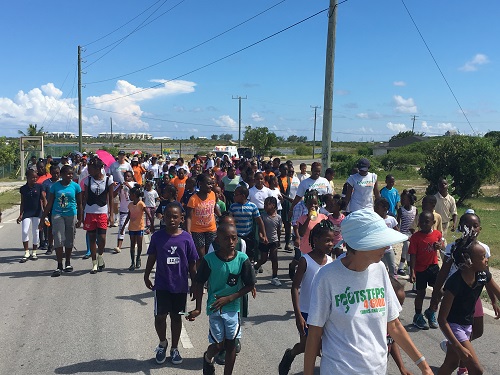 Providenciales, TCI, September 29, 2016 – The Governor, Peter Beckingham, took part in the Footsteps4Good walks in South, Middle and North Caicos on 26-28 September, joining all the primary and high schools.  He said afterwards: 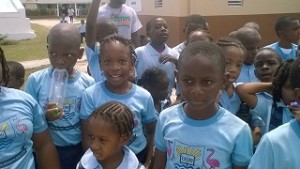 “Walking with the 250 plus schools children across South, Middle and North Caicos, and a good many teachers, business people and officials was a wonderful way of saying “farewell” to these beautiful family islands. The excitement of the children, especially from the junior schools, was palpable, and if their enthusiasm translates into determination and energy later in their schooldays the future of TCI is indeed bright. I had great chats to some of the children, learning about their ambitions – basketball or soccer player or doctor, among others – and their favorite pastimes – mainly sport!

“The walk gave me a great opportunity to see developments on the islands. The new runway being built in South Caicos is a big leap of faith by the Government in the future of the island, as are the plans by the Sailrock development. I would be fascinated to return in about five years to see how the island has been transformed.”

“There is less obvious sign of new development in North and Middle Caicos, but there is a good deal of smaller building work  and real estate activity which suggests that there is optimism in the community about prospects. A number of Parrot Cay staff supported the walk in North Caicos, and it was great to hear of the resort’s plans for re-investment in the property, which is one of the surest signs of a strong economy.

“You can’t fail to be struck in North and Middle Caicos by the beauty of the surroundings – “beautiful by nature” is exactly the right chord to describe them. I was lucky enough to arrive at Flamingo Pond at the same time as the Royal Society of the Protection of Birds (RSPB) secondee to the National Trust, Simon Busutill, who with his telescope was able to show me a flock of around 1,000 flamingos: a fabulous sight. Simon also took me with a local guide to walk around the Wades Green plantation, which is being cared for so well by the National Trust and has some of the eerie charm of the very different Ankor Watt remains in Cambodia, where the collapsed temples are also enhanced by the trees struggling through the buildings.

The only jarring note on the walk was the volume of litter. In two minutes between Whitby and Kew I counted 60 glass or plastic bottles: imagine how many there must be on both sides of the 3 mile road!  As one of my walking companions remarked we desperately need a “Clean Up” education campaign across the islands: if the next government promised that, they would be doing everyone in TCI a great service, before we no longer deserve the beautiful by nature brand”. 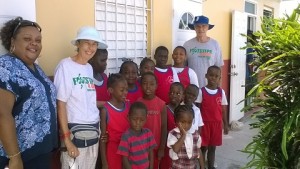