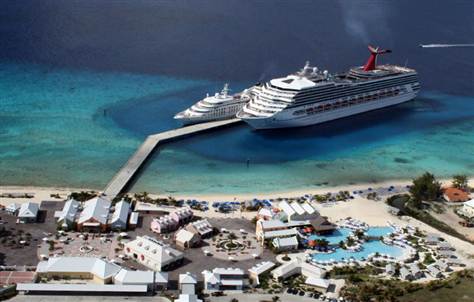 Grand Turk, 17 Nov 2014 – Carnival Cruise Lines is threatening to pull out of Grand Turk if the vendors and attraction do not shape up… guest comments are said to be the impetus for the stern warning from Carnival. Residents are already reacting to the announcement which came officially today in the House of Assembly from the Minister of Finance Washington Misick.

Hon Misick in his ministerial statement explained if the island does not shape up, Carnival will ship out… and with a cruise port opening in the Dominican Republic and another slated for opening in Haiti soon, it makes options for the cruise line company a likely reality. Some comments online paint a negative picture of Grand Turk; posted reportedly by guests who claim there is nothing to do, nothing much to see, too much donkey poop, a desperate people clamoring for tourist dollars, overcrowding on the beach and only interesting if you spend your time at Margaritaville. It was last week that Ministers Misick and Lightbourne met with vendors and tour operators in the Capital; one of them explained to Magnetic Media that the meeting was to announce that government wants to introduce zones. A new and temporary site for the vendors to be shifted to… which would be outside of the port gates and a move which Carnival hopes will reduce guest hassling.

The Minister said there complaints of sales of illicit drugs and un-regulated sales of alcoholic beverages… the individuals attending the meeting believe the reports are bogus and charged that the Minister is somehow in cahoots with Carnival to get rid of them.