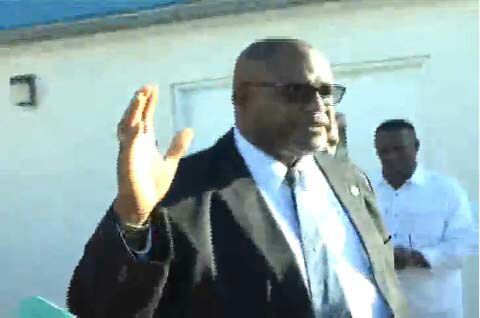 Providenciales, 18 Nov 2014 – Vindication it seems for an embattled police boss after a five woman, two man jury late yesterday returned a not guilty verdict for Rodney Adams. An emotionally charged atmosphere is how one described it as the verdict was read after a three hour deliberation in the case where Adams was accused of breaching the integrity commission ordinance and put on administrative leave from the Royal Turks and Caicos Islands Police Force. Some shaking their heads at the outcome, not pleased; others opining that it was a bad day for the justice system and Rodney Adams, relieved and weeping openly at the results of the trial which forced him out of his role as the Deputy Commissioner since last year.

His attorney, Ariel Misick of Misick and Stanbrook managing to get four of five charges dropped… and the jury unable to come to firm agreement that Adams was acting as a police officer when he interviewed a witness in the Keziah Burke murder probe at a bar room; recording that conversation on his I-pad… all of it happening before that man, Dorrell Williams was interrogated officially by the investigating officers. Adams’ attorney said he was being a fretful father… the prosecution aimed to prove that Adams was being an interfering policeman. Judge in the case, Chief Justice Margaret Ramsey-Hale reportedly gave firm instructions to the seven member jury that it must agree, beyond a shadow of a doubt on three points… Magnetic Media is told that the jury was solid for guilty on two points: that Rodney Adams acted recklessly and unreasonably to protect his private interests and that he got involved in this case knowing that action would prejudice the case… it was on the point of whether the man, who recently lost a son in a motorcycle accident, was acting as a concerned father or an overzealous police officer where the jury faltered and could not resolutely agree to his guilt.

Following the judge’s instructions… because they could not agree on all three points, the jury returned that not guilty outcome. The trial is history now… as for what the future holds for Rodney Adams and his likely return to the Police Force… we await comment said to be coming later in a press conference.