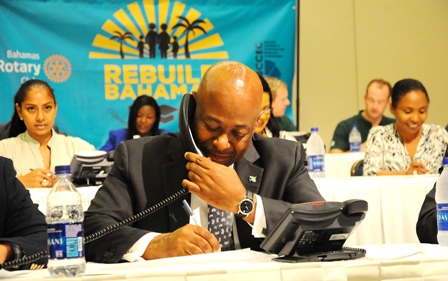 Providenciales, 30 Oct 2015 – It was called an amazing turnout for a good cause, as the One Bahamas Association partnered with the Royal Turks and Caicos Police Force to raise money for The Bahamas victims of Hurricane Joaquin.

Many gathered at the Tiki Hut Restaurant where OBA collected clothes and other basics for victims of the storm. Telicia Darville, a Board Member for the OBA and Long Island native called the disaster “pure devastation”.

It was revealed that the fundraising efforts were spearheaded by Deputy Police Commissioner, Rodney Adams for their Welfare Committee.

Canned goods are sill be accepted, Bahamasair will fly items into those victims and money can be donated at St. Monica’s Anglican Church.

This past Tuesday night, The Bahamas raised $230,000 through a telethon. Government now says damages are at $80 million dollars.