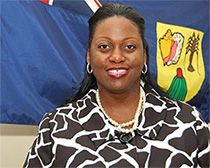 Providenciales, Sept. 22,2014 – Disagreement on whether or not the nation’s business should be halted due to the absence of the Attorney General; the AG was reportedly attending the swearing in ceremony of the new Chief Justice.

Traditionally, that ceremony should have taken place in Grand Turk, instead it was in Provo and the Speaker did not agree to convene the sitting without the government’s legal consul who is the AG. Eventually, the House proceeded… there were ministerial statements from GSS Minister, the Health Minister and the Education and Youth Minister.