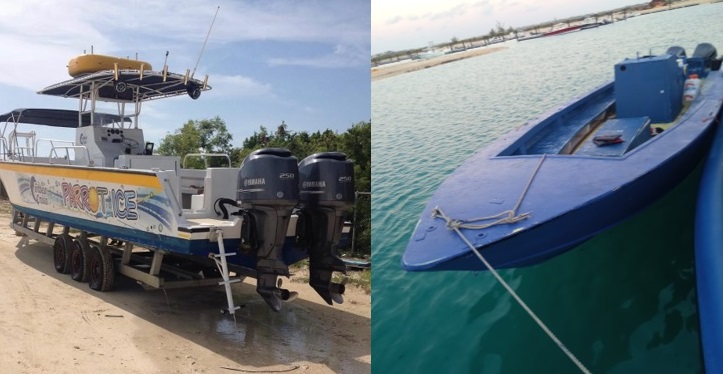 #TurksandCaicos, March 8, 2021 – It left the country as the target of a hot pursuit on the ocean by TCI Police which ended with the thieves getting away with the vessel, owned by Caribbean Cruisin.  The report in January was the office was broken into and stolen were keys to the stealthy boat which was last seen escaping capture near French Cay.

The boat was back on Saturday night with illegal migrants on board.  Gone were its aesthetics in exchange for a dark blue paint job; being lighter, lower and darker makes dodging detection by the coastal radar more likely.

Video circulating on social media exposed the scene and one by one, men who appeared to be Haitians crawled out of the rear of a vehicle.  They were taken into custody and criticism of the TCI police handling of the theft back in January was re-ignited.

Residents are fed-up with the stream of illegals from embattled, impoverished nearby Haiti.

One comment on social media suggests conspirators involved in these lucrative people smuggling voyages are living among us; allegedly staging thefts while orchestrating the illicit escapades.

In another posted comment, it was said Police should have tried harder to retrieve the stolen boat; that officers gave up too easily and played it too safe.  Now the boat is back but with an untold number of suspected Haitians trying to flee their unstable home, no matter the cost or the likelihood that they could be caught.

Both theories are popular.

It is believed 20 to 30 Haitians came in; some may have escaped  and it appeared civilians (once again) helped in the apprehension of the suspected illegal migrants in the Long Bay area of Providenciales.

There has been no official comment on this latest sloop landing/arrest.