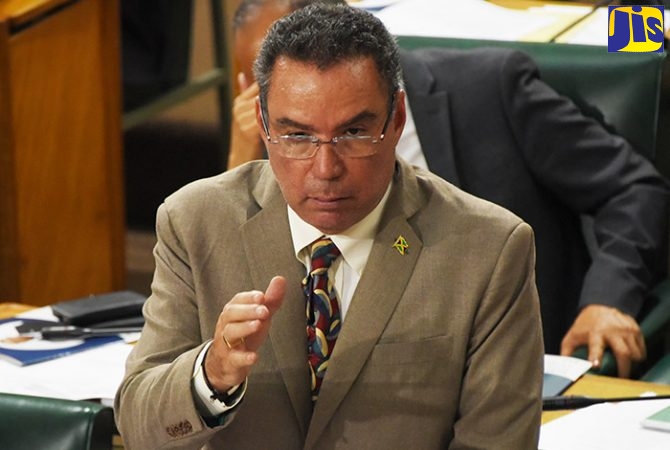 #KINGSTON, April 22 (JIS):    The House of Representatives on Tuesday (April 21) began debate on the Registration of Titles (Amendment) Act, 2020, which is aimed at reforming Jamaica’s land-titling system.

In his opening remarks, Minister without Portfolio in the Ministry of Economic Growth and Job Creation, Hon. Daryl Vaz, said the reform is necessary due to the large number of persons occupying land whose names are not on the titles, sometimes for generations; and the need to modernise, as well as enhance administrative structures to simplify processes and reduce costs.

He further noted that the desired outcomes include increased security of tenure and a more efficient and systematic land-titling system.

“Consequently, the Bill seeks to give effect to the policy decision for implementation of an adjudication-centric and driven process for proving the ownership of land and the separation of the processes of planning and subdivision approval from the issuing of titles, under the Registration of Titles Cadastral Mapping and Tenure Clarification (Special Provisions) Act,” Mr. Vaz said.

Other outcomes include consequentially amending the Limitation of Actions Act to provide that, where boundaries are adjudicated upon and pursuant to a systematic registration process, are deemed to be acquiesced, notwithstanding any enactment to the contrary and provided the parties do not object to same.

Regarding sections of the Bill, Clause three seeks to amend Section 15 of the Act by inserting paragraph (d), which empowers the Registrar of Titles (hereinafter “Registrar”) to lodge caveats for: the protection of Trusts; and the protection of a charge for outstanding property taxes that may be applicable to any land that is the subject of the proposed section 28A (1) (b).

“The lands, subject to section 28A(1)(b), are those that the applications for registered titles were reviewed by an Adjudication Committee, which issued an Adjudication Certificate under the Registration of Titles Cadastral Mapping and Tenure Clarification (Special Provisions) Act,” Mr. Vaz said.

In addition, clause four seeks to insert Sections 28A and 28B in the Act. Mr. Vaz said the proposed Section 28A(1) seeks to provide for applications to be made to obtain registered titles without reference to the Referee of Titles where a Certificate of Compliance is issued under the Facilities for Titles Act and the applicant or his personal representative is named in the said Certificate of Compliance; an Adjudication Certificate is issued [under the] Registration of Titles Cadastral Mapping and Tenure Clarification (Special Provisions) Act by the Director of Adjudication Services or the Adjudication Committee directing that the Registrar of Titles shall issue an absolute or qualified title; and pursuant to a Court Order under which the court has determined ownership.

Clause 10 of the Bill seeks to amend Section 178 of the Act. The effect of this amendment is to increase the maximum value of the monetary penalty for offences under the Act.

Mr. Vaz said the proposed amendment empowers the Parish Court to impose on a convicted offender a fine of up to $1 million instead of the existing maximum of $1,000.

The proposed amendment also prescribes a term of imprisonment of up to six months in default of the payment of the fine, and prescribes that any certificate of title, entry, erasure or alteration so procured or made by fraud shall be void as against all parties or persons privy to such fraud.

The Bill seeks to give effect to the policy decision to provide for the full operations of the Land Administration and Management Programme processes, including the adjudication processes to fall under the responsibility of the Chief Executive Officer of the National Land Agency, and amend the Registration of Titles Cadastral Mapping and Tenure Clarification (Special Provisions) Regulations to give effect to the changes that will be made to the Act.

Jamaica among countries to receive more test kits from PAHO

GOV’T will not Relent in Crime-Fighting says Jamaica PM