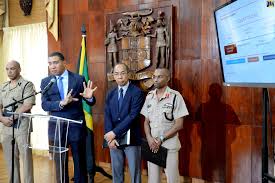 #KINGSTON, April 22 (JIS):    Prime Minister, the Most Hon. Andrew Holness, is warning criminals who are seeking to use the coronavirus (COVID-19) crisis to continue their criminal activities that the Government will not relent in its crime-fighting efforts.

He said that maintaining law and order is paramount even as the public health measures are enforced to combat COVID-19.

“We have picked up this intelligence. Let it be known that even though we are consumed with fighting this health epidemic, we have not relented nor are diverted in our efforts to fight the crime and murder and violence epidemic in this country,” he added.

The Prime Minister was opening the debate on four resolutions to extend several States of Public Emergency (SOEs) by 90 days, during the sitting of the House of Representatives on Tuesday (April 21).

He told the House that statistics for the period January 1 to April 15 show a decrease in all serious crimes over the corresponding period in 2019.

“It is reasonable to assume that the COVID-19-related measures have mutually re-enforced the current efforts under the SOE, and the value of these measures is certainly underscored in a national crisis,” Mr. Holness told the House.

“We must make all efforts to contain and control the crime virus, which is also taking the lives of Jamaicans. More Jamaicans have died from murders now than Jamaicans have perished from the virus,” he pointed out.