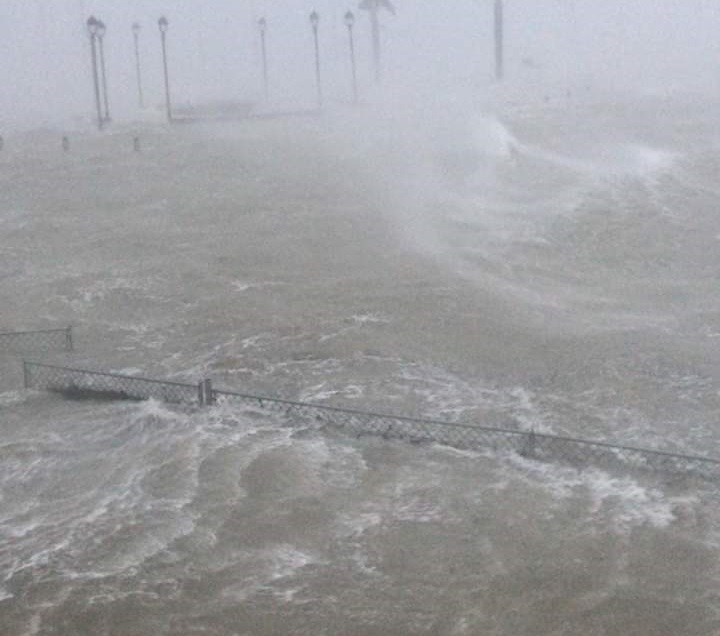 #Bahamas, September 2, 2019 – Abaco and its cays faced monster category five Hurricane Dorian in the light of day and many of the people were devastated at the ferocity of the Atlantic Basin’s worst hurricane in modern history.

Grand Bahama Island has had to face the beast in the dark of night and messages and images Magnetic Media has received reveal a howling, frightening wind and a relentless surge.

Most vexing though, that slow-going Hurricane Dorian has decreased forward speed to a mere 1 mile per hour.

We can see the water has indeed swelled and is crashing against the Grand Bahama International Airport.  Video of the surge was filmed from the second level of the building.

The forecast from The Bahamas Department of Meteorology is that terrible hurricane Dorian will spend all day and all night pounding the island of Grand Bahama.

“HURRICANE DORIAN IS DRIFTING WEST NEAR 1 MPH.  A SLOW WESTWARD TO WEST-NORTHWESTWARD MOTION IS FORECAST DURING THE NEXT DAY OR SO, FOLLOWED BY A GRADUAL TURN TOWARD THE NORTHWEST AND NORTH.  ON THIS TRACK, THE CORE OF EXTREMELY DANGEROUS DORIAN WILL CONTINUE TO POUND GRAND BAHAMA ISLAND THROUGH MUCH OF TODAY AND TONIGHT. ”

An earlier forecast had said of Abaco that, “WATER LEVELS SHOULD VERY SLOWLY SUBSIDE ON THE ABACO ISLANDS DURING THE DAY.”

An all clear is given for New Providence, Eleuthera and Andros.  Tropical Storm conditions are expected for Bimini and the Berry Islands.

“…HOWEVER, RESIDENTS IN THESE ISLANDS ARE ASKED TO CONTINUE TO EXERCISE CAUTION AS THEY WILL STILL BE IMPACTED BY SEVERE SHOWERS AND THUNDERSTORMS FROM THE OUTER BANDS OF DORIAN.  THE BAHAMAS DEPARTMENT OF METEOROLOGY’S DOPPLER WEATHER RADARS IN NEW PROVIDENCE AND MARSH HARBOUR ABACO, AND EMERGENCY MANAGEMENT HURRICANE MODELS INDICATE THAT CATASTROPHIC HURRICANE CONDITIONS WILL CONTINUE IN GRAND BAHAMA THROUGH TODAY AND TONIGHT, AND IS SUBSIDING IN THE ABACOS.  RESIDENTS IN BIMINI AND THE BERRY ISLANDS WILL CONTINUE TO BE IMPACTED BY TROPICAL STORM FORCE WINDS TODAY.”

In New Providence, there is an island wide black out and flooding in some areas.

Hurricane Dorian, despite decreasing wind speeds to 165 mph will pack a double wallop as the eye is also passing over Grand Bahama.

“THE EYE OF DORIAN CONTINUES TO MOVE OVER THE EASTERN END OF GRAND BAHAMA AND CONTINUES TO MOVE WESTWARD.  RESIDENTS IN THESE AREAS SHOULD NOT BE DECEIVED BY THE LULL IN THE WINDS AS THE EYE PASSES, BUT REMAIN INDOORS AND PREPARE FOR THE SECOND PHASE OF THE HURRICANE.”

Boaters are advised not to venture out.  Storm surges can be between 18-23 feet and anywhere from 12 to 30 inches of rain can fall as hurricane Dorian moves westerly out of The Bahamas… but ever so slowly.

Needless to say, people are anxious and want to hear from loved ones especially following the harrowing experience played out on Sunday in Abaco.

One voice note we received was heartbreaking as a young woman tearfully issued a plea for help and explained: “They say Marsh Harbour is gone, Murphy Town is gone, Dundas Town is gone….”

Residents in Freeport are reporting extremely windy conditions with debris; but that they are well and ready and hopeful as they ride out the storm.