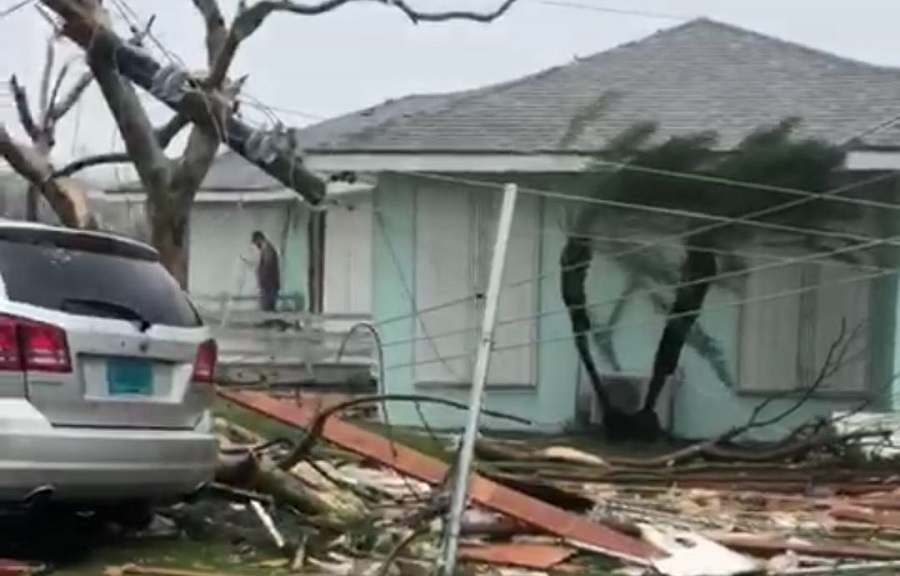 #Bahamas, September 2, 2019 – Grand Bahama Island is no stranger to dangerous hurricanes of major strength and residents of Freeport City today report that all is well.

We saw trees waving frantically in the whipping winds, which thankfully have dropped by 20mph since Hurricane Dorian hit Abaco just 24 hours before.

Now at 165 mph but moving at a snail’s pace, 1 mile per hour the hurricane is virtually stalled over Grand Bahama.

In New Providence, home to the capital of the country, Nassau there continues to be an island wide black out and there is widespread flooding. Still, an all-clear for the island and two others was issued by the Bahamas Department of Meteorology.

“THE ALL CLEAR HAS BEEN ISSUED FOR NEW PROVIDENCE, ELEUTHERA AND ANDROS.  HOWEVER, RESIDENTS IN THESE ISLANDS ARE ASKED TO CONTINUE TO EXERCISE CAUTION AS THEY WILL STILL BE IMPACTED BY SEVERE SHOWERS AND THUNDERSTORMS FROM THE OUTER BANDS OF DORIAN.”

Latest Alert from Bahamas Department of Meteorology: “THE EXTREMELY DISTINCT EYE OF HURRICANE DORIAN WAS LOCATED BY THE BAHAMAS DEPARTMENT OF METEOROLOGY DOPPLER WEATHER NEAR LATITUDE 26.6 DEGREES NORTH AND LONGITUDE 78.2 DEGREES WEST.  THIS POSITION PUTS THE EYE 40 MILES EAST OF FREEPORT, GRAND BAHAMA, 63 MILES WEST OF MARSH HARBOUR, ABACO OR 96 MILES NORTHEAST OF BIMINI AND 113 MILES NORTH-NORTHWEST OF NEW PROVIDENCE.”

There are no reports at this hour from the eastern and western ends of Grand Bahama, where conditions were expected to be more severe.

Residents of 26 areas in the two ends of the island were called upon to evacuate or move inland, including West End, Sweeting’s Cay, Water Cay, Queen’s Cove, Bootle Bay, Smith’s Point, High Rock and McClean’s Town.

A journalist in Nassau informed Magnetic Media that Bahamia, which is on the southern side of Grand Bahama and which is flanked by a canal system was “flooded”.

Another report from social media explained that Bevan’s Town, which is in the east is under 10 feet of water.

The information is however, unconfirmed by officials.