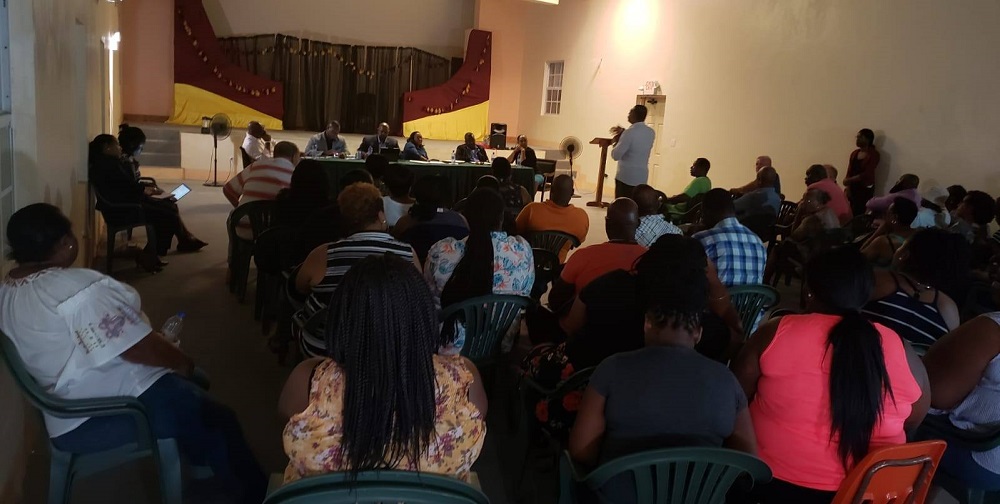 #Providenciales, June 4, 2019 – Turks and Caicos – Nine million in budget year 2018-2019 and another $11 million in this new fiscal year will mean radical refurbishment in South Caicos, and residents turned out in healthy numbers to hear about plans for restoration of the island.

Premier Sharlene Robinson is the minister responsible for finance and island administration.  An Office of the Premier media release explained that the plan for South Caicos were spelled out.

South Caicos residents and natives have been vocal about their disappointment in the rundown state of the island, particularly in the aftermath of hurricanes Irma and Maria in September 2017.  Photographs and comments about public facilities including the clinic, the morgue, the wharf, the airport and the Regatta Village have made headlines several times since the storms 20 months ago.

“Premier Robinson in her updates as the Minister of Finance expressed that about $20m have been allocated for repair and other works over her Government’s 3 Budgets. It was announced that these works are all progressing and residents received confirmation that sporting equipment should be coming soon for the schools.”

South Caicos residents have also been concerned about banking facilities and airline connectivity and reliability.  It was announced that both are being worked on by the PDM Administration.

“It was confirmed that TCIG is actively engaging with banking institutions for the return banking services to South Caicos. Caicos Express Airways won the subsidy bid to provide airlift services into and out of South Caicos. Those services to begin 1 June 2019. It was noted that flight times are being discussed to better accommodate both residents and visitors to the island.”

Minister of health Edwin Astwood addressed management of the pharmacy, construction of a new morgue and maintenance of the island’s clinic.

As the ‘fishing capital’ of the country, South Caicos residents were informed that there are studies and reports coming to boost performance of the industry.  Minister of Tourism, with responsibility for maritime and fisheries, Ralph Higgs was at the meeting.

“… announced that Department of Environment and Coastal Resources officials will be making a visit in the coming weeks for public consultations on how they can improve the industry and share data on Lobster, Conch and Fish stocks.  It was noted that after the hurricanes, the Lobster Open Season performed better than expected. A new Environmental Bill which will speak specifically to legislation to support a sustainable conch and lobster export industry will be taken to the House of Assembly in the coming months.”

South Caicos islanders were told that a new youth officer is to be assigned and the cadet corps is to be re-established in the island.

Additionally, the Office of the Premier reported that: “The Airport fencing will return to tender due to no bids the first round of tenders will be posted in July 2019. The repairs of the Library, the construction of the Fish House and canal works will be included in next year’s budget.”

Today there are two public meetings; Salt Cay at 11 am and Grand Turk at 6:30pm.