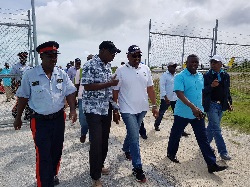 #Bahamas, September 14, 2017 – Grand Bahama – Prime Minister Hubert Minnis will today touchdown in Grand Bahama for the first time since the terrible twisters spawned by Hurricane Irma left at least 78 people homeless.  The PM will tour the damages in the aftermath of Irma, and will arrive in the country’s second city around midday for that first-hand look at what devastation was wrought by the unprecedented storm.

Meanwhile, Tourism Minister Dionisio D’Aguliar is telling media the country dodged a major bullet when Category 5 hurricane Irma shifted from a direct course with more of the islands.  The Minister said the country’s tourism industry should be able to rebound quickly.

Still, marketing he explained will be ramped up now to circumvent international media reports that The Bahamas was or would be wiped out by the super typhoon.  The marketing, said D’Aguliar will focus on the fact that most of the islands were not hit by #HurricaneIrma.