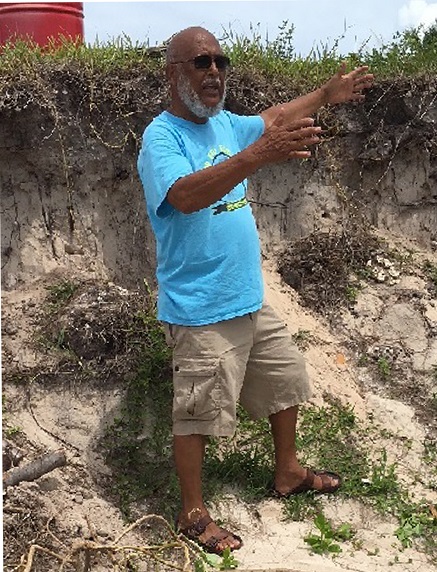 Bahamas, January 26, 2017 – On the heels of official news that the 2016 was the hottest year on record globally since weather record-keeping began in the 1880s, (www.edition.cnn.co), Save The Bays Chairman Joe Darville urged the nation’s leaders to act before up to 80% of the islands of The Bahamas are swallowed or inundated by water from rising seas caused by climate change.

Darville, a climate change lecturer certified by Al Gore, stepped up his year-long efforts in the face of what he says “is irrefutable evidence that we are on a path to becoming little more than a memory of a forgotten time when we were once the most beautiful place on earth.”

“The very same waters that inspired astronaut Scott Kelly to declare The Bahamas to be ‘the most beautiful place from space’ could be inundated by water from rising seas in our grandchildren’s lifetime,” said Darville.  At 75, the lifelong educator and human and environmental rights advocate has vowed to spend his remaining years sharing the message of protecting and preserving The Bahamas. In recent weeks, he stepped up those efforts, talking to students, appearing on radio, participating in interviews, spreading the warning wherever he could that the time for talk is over, the time for action is now.

“We have only 5,300 square miles of land in 100,000 square miles of ocean and the prediction is that by the end of this century 80% of our islands will be inundated by the sea,” said Darville. “We must be prepared, we must be alert.  We owe it to our children and to generations to come to do everything in our power to mitigate against the effects of climate change.  We cannot stop it, but we can slow it down and it is up to us to do that and we can.”

According to Darville, mitigation can take several forms. First, he says, is protection of life by making the tough decision not to allow people to rebuild on treacherous, low-lying properties where stronger hurricanes in the future that will form in the Atlantic will strike with little warning and could swallow entire seafronts.  He points to land in Grand Bahama that has receded 35 feet in a decade and the home where he grew up in Long Island that was washed away by Hurricane Joaquin.

Next, he says, Bahamians must reduce the nation’s carbon footprint.  Though not large relative to highly industrialized nations, the local footprint could be significantly reduced by growing more food locally, establishing green spaces, trading fossil fuels for sustainable power supply sources and requiring a less harmful type of fuel for jet aircraft.  “Today, 30 million tons of carbon is emitted into the atmosphere by jets every year, burning the ozone layer,” he said.  And, he suggests, it is time that Bahamians revived the art of boatbuilding.

“We are going to be a floating country, I don’t want to scare people but I want to alert our people, to wake them up to what is happening around us.  There are those who say that what we are seeing is just part of Mother Nature’s cycle.  Yes, it is part of a cycle but climate change is speeding it up in a way we have never experienced before. That is why each of the last three years has been recorded as the hottest year in history.  We have seen 20,000-year cycles but this cycle is accelerated by 300% because of industrial pollution, greenhouse effects and what we have done to alter the environment.  I just want us to be aware, to develop a plan and realize this is happening right now, not in the future, but before our very eyes and only we have the power to change it.”

Launched in 2013, Save The Bays has been an outspoken non-government organization promoting environmental protection, freedom of information and an end to unregulated development through education, legal and public awareness campaigns. Its Facebook posts draw more than 20,000 friends and its 6-point petition www.savethebays.bs, has some 7,000 signatures.