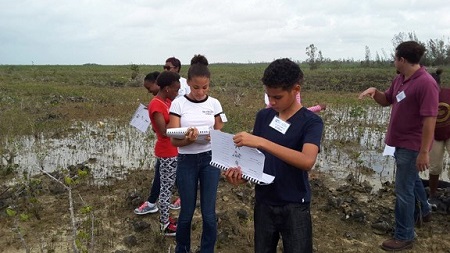 Freeport, Grand Bahama, January 12, 2017  – For the fourth consecutive year, young people from Grand Bahama are trading their right to sleep late or hang with their friends for the privilege of traipsing through woods and wetlands as they are groomed to become good stewards of the environment.  Thirty junior high students have been selected to take part in Save The Bays Youth Environmental Ambassador Program.  The respected youth development initiative launched on January 7 and will run until May.

“For the next five months participants will gain an awareness of their environment, learn the importance of taking care of it and how to keep it healthy for future generations,” said Rashema Ingraham, YEA organizer.   Discussions and field exercises will cover a myriad of topics including climate change, plastic pollution, coral reefs and mangroves.

“What is interesting is that many of them really want to be outdoors,” said Ingraham. “That may be difficult to conceptualize with all the lures of electronics and mesmerizing television shows. We have to find ways to get our children to connect to the outdoors so that they grow to appreciate the beauty of the world around them.”

According to Ingraham, the program’s success relies on the ability of facilitators to arouse passion about conservation and engaging participants to spread the message about its importance.   One of those facilitators, Bradley Rutherford, said he wished the program had been available when he was younger.  “It is a very enriching experience for facilitators and students,” said Rutherford.  “The opportunity is certainly one I wish was available when I was a youth.”

For participant Justus Fox, the YEA experience was unparalleled.  “I participated in workshops with similar activities, but nothing as good as my first session experience with the YEA program,” said Fox, a student at Jack Hayward Junior High, one of six schools with students who qualified to attend.   The others Bishop Michael Eldon, Sunland Baptist Academy, Sister Mary Patricia Russell Junior High, Tabernacle Baptist Academy, Jack Hayward

Junior High and Mary Star of the Sea.   Sessions are held bi-weekly on Saturdays at the YMCA.