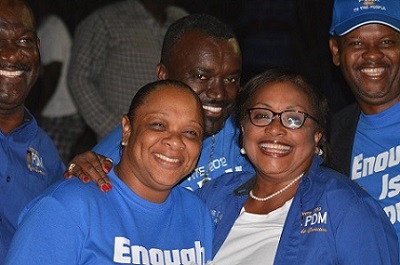 Providenciales, TCI, December 16, 2016 – Change has come for the country and The People’s Democratic Movement’s winning members were expected to be sworn in today as the new government of the Turks and Caicos Islands.

In a grueling battle, and after a shamefully long wait for election returns from the Elections Office, it was finally revealed at 8:33 am, about 13 hours after the polls had closed that the PDM took 10 seats, including  four At Large spots  and six of the District seats, with a virtual tie still pending for The Bight constituency up to news production time.

Edwin Astwood, Ralph Higgs, Douglas Parnell, Goldray Ewing, Sean Astwood and Delroy Williams won at that district level; Sharlene Robinson, who will be the first female premier, Josephine Connolly, Derek Taylor and Karen Malcolm make up the remainder of the PDMs House of Assembly members in this new legislature.

Rufus Ewing was not returned to Parliament placing 7th out of the 21 All Island Candidates; Michael Misick who controversially offered as an Independent Candidate, had a disappointing result for him coming in 11th with 1,629 votes.

Leader of PDA, Oswald Skippings got only 549 votes and was the top performing PDA candidate, while Charles Washington Misick, Mike’s older brother and outgoing Finance Minister  with the PNP made it to the top 5, beating millennial, Robert Been Jr. by a mere 21 votes.

It is expected the PDM will have celebrations tonight at the Party.