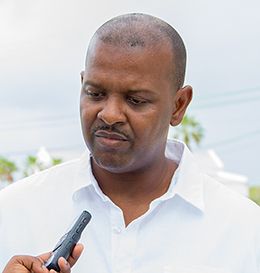 Providenciales, TCI, August 30, 2016 – He calls it deplorable, upsetting, frustrating and an issue being ignored by the Government.  Member of Parliament for Five Cays, Hon Sean Astwood spoke to Magnetic Media recently, after taking us on a tour of the Five Cays part of his district and said the roads are so bad, that even jitneys won’t drive along them and that is leading to crimes against some residents.

“We have situations where the jitney services are dropping people out to the main road, and then they have to walk half a mile in the dark, to their homes with the risk of being robbed.  And we’ve actually had situations where persons were the victims of crimes, because mainly the road situation where instead of being dropped to their door, they are being dropped a vast distance off because of the road, and of course in addition to that, the lack of street lighting only adds to the problem.” – MP Sean Astwood

Astwood, who is deputy leader of the PDM Opposition Party says there is a lack of concern and a blatant disregard for the right living the people of Five Cays also deserve.

“This is one area, there are a whole vast number of areas like this in Five Cays, and don’t get me wrong, I do appreciate and understand that the government sees Five Cays as a ghetto, but it’s very insulting and I see Five Cays as a community that is waiting on a caring government, who sees their needs, who understand the importance of them as citizens and residents of this country, and who understands that they deserve to be treated better.  The residence of Five Cays deserve more and simply I demand more for my people.” – MP Sean Astwood

The MP, who also calls his district home and his home town said the area is being denied opportunity for development, investment and infrastructural enhancements.  One resident described what it’s like to maneuver on foot in her community.

“In Five Cays, the road is not very good and there are no street lights.  I get off from work sometimes at ten, and it doesn’t make any sense at all, none what so ever.  So I think it is fair that you guys can actually put some street lights on the Granny Hill road and actually fix these roads because the jitneys don’t  come up this road very easy.   And it’s not fair as a female  of the Turks and Caicos Islands with this situation, and I am highly disappointed in the government of the TCI.” – resident

The matter was recently brought up in the House of Assembly, this was reaction to his parliamentary question to the PNP Administration.