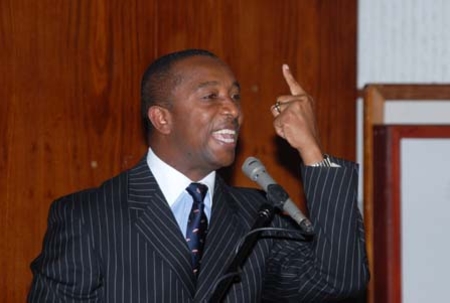 Providenciales, 15 Feb 2016 – Every intrusive and erratic remark and statement made by the Special Prosecutor for the Crown must be proved to be true; it was the overarching theme of the statement today from Ralph Thorne, the Queen’s Counsel representing former premier Michael Misick.

Thorne was revved up in his presentation and called the opening statement by Andrew Mitchell, QC nothing more than a political vendetta aimed at ‘getting Mike’. He said, when proceedings resumed this morning at the Myrtle Rigby Health complex that, “An expedition in character assassination…” is what Mitchell led in his abnormal opening, which seemed to draw conclusions instead of the traditional method of promising, then proving allegations. Thorne promises to prove that the charges are politically motivated and he will aim to defend the character of his client.

Thorne has a problem with the absence of any civilian witnesses, he has an issue with government witnesses who are coming in their official capacity and he rejects that the former Governor was bullied by Michael Misick during his tenure and Thorne takes exception to the fact that Developers in the debacle, are missing from the trial.

Thorne said, the mountain of apparent evidence by the SIPT will turn into a mouse of proof, and that it will not be enough to satisfy the court.