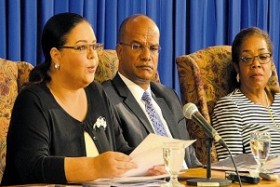 KINGSTON, Feb. 16 (JIS): The Passport, Immigration and Citizenship Agency (PICA) is moving to further safeguard the identity of persons, with the introduction of a facial recognition feature in the production of passports.
Chief Executive Officer (CEO), Jennifer McDonald, said the feature was initially introduced at the 15 immigration kiosks installed at the Norman Manley International Airport, in Kingston, and the Sangster International Airport in Montego Bay.

The CEO said a decision was subsequently taken to expand and incorporate it in the passport production process.
“One of the primary reasons for this is to reduce (the possibility of) double identity. It really serves to protect the identity of the citizen, because the worst thing you want is to come to renew your passport and be told that it has been renewed already, because someone stole your identity,” she explained.
Mrs. McDonald said the project is in the final stages of implementation, and is expected to be completed by the end of the 2015/16 fiscal year in March.

Meanwhile, Mrs. McDonald said the introduction and expansion of several other key technology applications within PICA’s operations have also served to significantly boost the quality of the agency’s service delivery.

Notable among these, she informed, is the electronic queuing system at the passport office on Constant Spring Road in St. Andrew.

“So, now we know the longest waiting time, the shortest waiting time (and) the average waiting time of customers. Our supervisors can look at the queue (s) and move resources to ensure that more persons are working on particular functions, in order to try and manage the queues better,” the CEO said.
Mrs. McDonald informed that an average of 20 per cent of the over two million passengers passing through Jamaica’s two international airports annually are now processed using the 15 automated immigration kiosks at both locations.

She said tourists and other travellers using the kiosks have welcomed their introduction.
The kiosks were installed by the National Security Ministry in 2014, as part of an overall $200 million airport improvement programme. Ten are located at the Sangster Airport, with the remainder situated at the Norman Manley Airport.