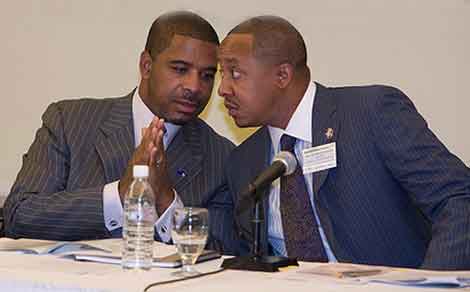 Providenciales, 01 Feb 2016 – Defendants in the SIPT Government corruption trial want to know who is paying for the website and so called global media campaign which is daily being updated with the Opening Statement presented by Andrew Mitchell.

In a media release, the question is asked if the tax payers are footing this bill… the main queries come from Michael Misick, the former Premier and McCallister Hanchell, the former Minister for Lands, who are both on trial.

Mr. Misick: “I’d like to know how much this is costing, which taxpayers are paying for it and who is running this operation to make unproven allegations against the defendants in the press?”

It is true, this is the most information the media has had since Helen Garlick was hired by the UK for this case; in the trials against Gordon Kerr and Timothy O’Sullivan, attorneys practicing in the TCI, the evidence presented in court was barred from being reported; citing potential reputational damage for the pair.

Hanchell added, “We all want a fair trial, but, when we don’t have access to a jury and the state uses taxpayer money to fund a PR blitz against us, you wonder if justice will really be served?”

Nine are on a trial to answer the Special Investigation charges of corruption. Misick and Hanchell say the ‘mystery group’ behind the website should be outted.