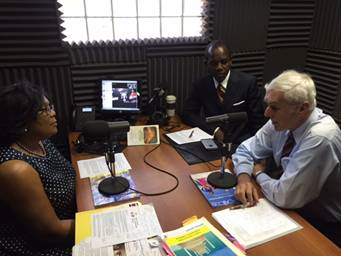 Providenciales, 15 Dec 2015 – The Governor was a guest on national radio last week when the world commemorated International Human Rights Day on December 10th.

The focus of Governor, His Excellency Peter Beckingham was on children, human trafficking, proper facilities for the mentally challenged and for juvenile defenders.

The Governor said: “We also talked about the problems for TCI, and many other communities… The current fallback position of a place in prison is inappropriate, and I hope that a visit by a UK NGO next year to TCI may help us start to improve an unhealthy position.”

Governor Beckingham said a recent report from within St Helena may hold valuable lessons for the Turks and Caicos as it focuses on children; the TCI just recently and finally identified a location for a juvenile detention center but the Governor, through his wife’s visits to the prison to spend time with younger offenders has formed the view that, “they need more education and support than they are receiving.”

The Human Rights Commission for the country is under the direction of Doreen Quelch-Missick, an attorney and advocate who was cited as doing a good work by the Governor with both the radio show and discussions which also underscore the need to, as the Governor put it, “confront the potential risks of illegal trafficking and to work at ensuring the key areas of employment, security and education are addressed.”