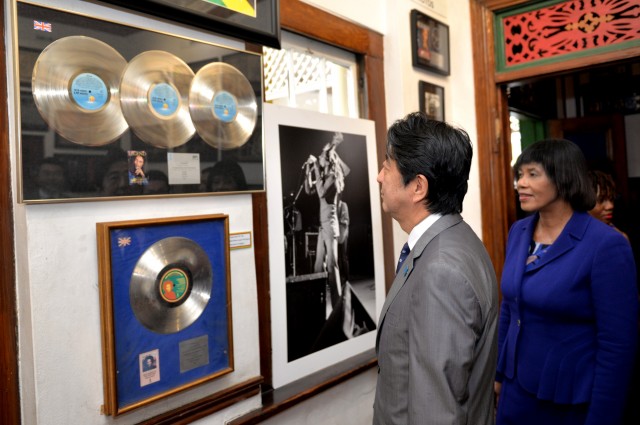 KINGSTON, Oct. 1 (JIS): Prime Minister of Japan, His Excellency Mr. Shinzo Abe, and Prime Minister, the Most Hon. Portia Simpson Miller, visited the Bob Marley Museum, on Hope Road, on September 30, just hours after his arrival in the island.

The tour followed a bilateral meeting with Jamaican Government officials at the Office of the Prime Minister to discuss cooperation for greater energy efficiency and Jamaica’s capacity to respond to natural disasters, as part of an official one-day visit.

Prime Minister Abe and Mrs. Simpson Miller paused for a photo in front of the statue of the late legendary musician.

“The Japanese Prime Minister was really happy to be here and he asked a lot of questions about Bob Marley and was even dancing to ‘One Love’,” said tour guide, Natasha Clarke, following the visit.

She said Mr. Abe requested that Mrs. Simpson Miller take a photo with him in front of the record shop and was excited about listening to Bob Marley songs on vinyl records.
Minister of Industry, Investment and Commerce, Hon. Anthony Hylton, and Minister of Youth and Culture, Hon. Lisa Hanna, also toured the museum with the Prime Ministers.

Earlier in the day, the Japanese Prime Minister laid a wreath at the Cenotaph in National Heroes Park, to honour Jamaican soldiers who fought in World Wars I and II. The Prime Minister leaves the island today (October 1).