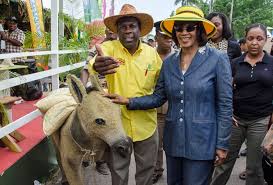 KINGSTON, Aug. 3 (JIS): The Government is moving apace to expand the cassava industry through a number of partnerships with the private sector and the University of the West Indies, with support from the Colombian Government in the establishment of a factory.

Providing details at the 63rd staging of the Denbigh Agricultural, Industrial and Food Show, in May Pen, Clarendon, on August 2, Prime Minister, the Most Hon. Portia Simpson Miller, said the partnership between the Government and Red Stripe, where that company is using the tuber as part of its brewing of beer, has shown that the industry can grow, and the Government is taking the expansion to the baking industry.

“As this new industry develops, I look forward to the opening soon, of a new cassava processing plant in Elim, St. Elizabeth, and thanks to the Government of Colombia for having provided this gift,” the Prime Minister said.

“We are also strengthening the cassava industry by working with the University of the West Indies, to produce cassava flour for use in the baking of bread,” she added.
Meanwhile, the Prime Minister emphasised that a vibrant agricultural industry is what is required for rural development and the nation’s food security, and that with the $1.74 billion the Government has spent over the past three years to develop the Agro Parks project, a foundation has been laid for “sustained increase in production.”

She said the project has helped to reduce imports and increase exports. “In doing so, we have been able to save millions of dollars as we import less, and earn more from export,” the Prime Minister explained, while lauding the over 200 farmers who have “shown resilience,” despite the many challenges facing the sector.

“No other sector has been hit by climate change as the farming sector,”
Mrs. Simpson Miller said, as she committed the Government’s support in tackling the various issues threatening the sector, such as bush fires and drought conditions.

“At the global level, I have been leading efforts to secure environmental cooperation and financing to help our farmers to plan for, and recover from events like droughts, hurricanes and sea level rise,” the Prime Minister noted.

Related Topics:cassava industryexpandthe Most Hon. Portia Simpson Miller
Up Next